Stormfall: Age of War by Plarium is one of the video games that are heavily advertised on most devices and social networks, so it’s hard for this title to go unnoticed if you spend some time online.

If you like browser games, and more important free games, you will eventually ask yourself one simple question. Is it worth playing Stormfall: Age of War?

Well, the answer to this question depends on several factors. If you are a big fan of strategy games, then you should give it a try by visiting the Stormfall Official Site. It’s free after all…

But what happens if you are a casual gamer who looks for a free strategy game, not too complicated, and funny enough to keep you occupied during your free hours?

Let’s see if Stormfall: Age of War can fulfill these needs.

The Age of War

Stormfall: Age of War was released on November 1, 2012, and it is a F2P (free to play) multiplayer strategy game.

The action takes place in Darkshine, a fantasy world once controlled by the Stormfall Empire. Now, the land stands divided in smaller kingdoms and it has become a battleground for all ambitious warlords.

In 2012, Stormfall: Age of War entered the Top 20 Facebook apps, and in 2015, Plarium released Stormfall: Rise of Balur, which is also a free to play video game available for iOS and Android devices.

When you start your journey as a new warlord, you will have the chance to meet Lord Oberon, who is not only your direct supervisor and guide, but also a trusted ally.

Lord Oberon’s voice acting as well as some of his sarcastic, yet inspired observations will accompany you through the first quests when you will learn how to build structures, train new units, and research new upgrades.

In Stormfall: Rise of Balur, Lord Oberon was replaced with Amelia Delthanis voiced by Megan Fox.

Stormfall: Age of War is a quest-driven game, which means that you will have to focus on completing as many quests as possible, because they grant the experience required to level up, and also open new features such as access to more buildings, units, or upgrades.

The quests are divided in three categories.

First, you have basic quests which aim to increase the strength and power of your kingdom, followed by daily quests and events.

Daily quests refresh every six hours and allow you to gather more resources. They are short assignments which don’t have any special requirements and you don’t need too much time to complete them.

The events however, can alter the story of the game and even the layout of the map. To complete them though, you will need some allies. Something that the game keeps reminding you way too often.

Join a League They Said

As a multiplayer game Stormfall: Age of War highlights the importance of having as many allies as possible by offering important bonuses. Basically, rewards are offered every time you manage to recruit one or more friends, or when your friends reach a specific level. Daily bonuses are also received based on the number of friends you have recruited.

Furthermore, the importance of not playing alone is outlined by the events and tournaments available to you. Events have a high payout and even if some of them can be played alone, most of them require a League.

When you join a League or recruit a friend you can receive or send reinforcements, trade goods, send troops, and compete in the said tournaments that will help you and your League become even stronger.

Obviously, the way you manage your resources is the key in Stormfall: Age of War since everything has a cost; however, unlike other developers, Plarium takes a different approach on how you produce them.

From the beginning you should know that in Stormfall: Age of War you need gold, iron and food. You get them by building and upgrading your houses, mines and farms. The maximum level you can reach for a single building is 25, and only 5 buildings of the same type can be built within a kingdom.

The resources produced by your buildings continue to stockpile even if you don’t play the game, meaning that you don’t have to return to your kingdom and click on your buildings to harvest them.

This feature is very convenient because you won’t lose your goods if you don’t have time to play the game. Unless, someone raids you…that is.

Raiding is another great way to get more resources from players who keep them unprotected, thus if you run out of gold just send your troops and they will fill your coffins.

From Archers to Warlocks to Dragons

Another interesting aspect in Stormfall: Age of War is how developers divided the troops you can train within your castle’s walls.

The units within one tab are divided in three sub-categories: defensive units, offensive units and spies. The way you use them, can and will change the outcome of most encounters. Practically, when you wish to attack another player, if you send defensive units, you will most likely lose the fight, but sending offensive units should result in a victory.

Besides attacking or raiding, your army can also be sent to destroy various settlements or to protect them. By training both defensive and offensive units, you will be able to complete two tasks at the same time.

These tasks grant various rewards such as scrolls, more resources, XP, or even important items for your hero.

A New Hercules Is Born

While Lord Oberon serves as your guide, your hero is the heart of your kingdom, and he also plays an important role in Stormfall: Age of War as the leader of your army. For these leaders, Plarium added several RPG elements.

Even if you can’t control him/her, your hero can be equipped with items you find during your adventures. Like in most RPGs the items are divided in categories based on their rarity, and they can be upgraded using Moon Coins.

Since your hero is static, the bonuses provided by the items equipped have a direct effect on your army. As an example the Wings of Power ring increases the defense of your infantry units by 3%. Once upgraded the defense bonus is 6.5%, and so on.

If you find items with lower stats, you can opt to sell them for more Moon Coins, but the whole selling process requires time and I wasn’t able to understand why.

Getting Stronger with Each Upgrade

To increase the overall value of your kingdom you need to complete a large number of upgrades. Starting with your basic buildings that provide resources, and ending with the most complex units, almost everything can be upgraded in Stormfall: Age of War.

Along with the resources required to start an upgrade, you will also need time in order to finish it. But this problem was partially solved, since Plarium introduced boost scrolls.

A scroll can boost the construction time and the time required to perform an upgrade by 5, 10, 15 minutes, or even 4 hours.

While they are not easy to get, you will usually receive several scrolls when you level up. Some of the most important upgrades can be found by unlocking the Lost Arts, which allow you to access new buildings and to improve your units.

And Then There Was a Dragon

Similar to the Lost Arts, the Dragon Arts can be unlocked by building your own Dragon Stone.

The Dragon Arts are also upgrades that will boost the efficiency of your buildings, but unlike the Lost Arts, they must be activated.

Additionally, these upgrades require Dragon Points that can be earned by defeating monsters using your dragon in a mini-game. The battle is quite amusing, but for each hit you consume the dragon’s mana. When you run out of mana, you will have to wait for it to replenish. Time is again an issue.

Even if it’s free to play, the most intriguing features of the game require Sapphires, which can be bought using real money.

From legendary units such as the Pegasus and Hydra, to keys that allow you to open chests containing valuable items for your hero, all of them cost Sapphires. The defensive structures also require Sapphires, thus don’t expect to surround your castle with walls and towers because that won’t happen anytime soon.

The good part though is that if you don’t want to buy them you can get them on a daily basis, or from Hamlets, as long as you have an army strong enough to control those establishments.

How valuable is your time only you can decide.

During my trip to Darkshine I enjoyed listening to Oberon’s ironic remarks, but after reaching a higher level he disappeared, leaving me with nothing but the drums of war and a repetitive music in the background.

The game’s graphics look outdated unless you zoom in to better observe the details on the buildings and the surrounding areas. Additionally, the whole interface seems crowded at first, but once you get used to it, things get better.

While Stormfall: Age of War may look like a game too complicated for new players, the large number of units, upgrades and features available, set it apart from similar games; and made me to think twice before sending my troops to battle like cattle to a slaughterhouse.

On the other hand, one of the things that made me feel uncomfortable was how the game continuously reminded me to recruit more friends, and that there is always a discount available if I need more Sapphires.

Overall, Stormfall: Age of War might not be a good looking game; however, it is a strong strategy game, with an intriguing story and a complexity that most F2P games can’t offer these days. 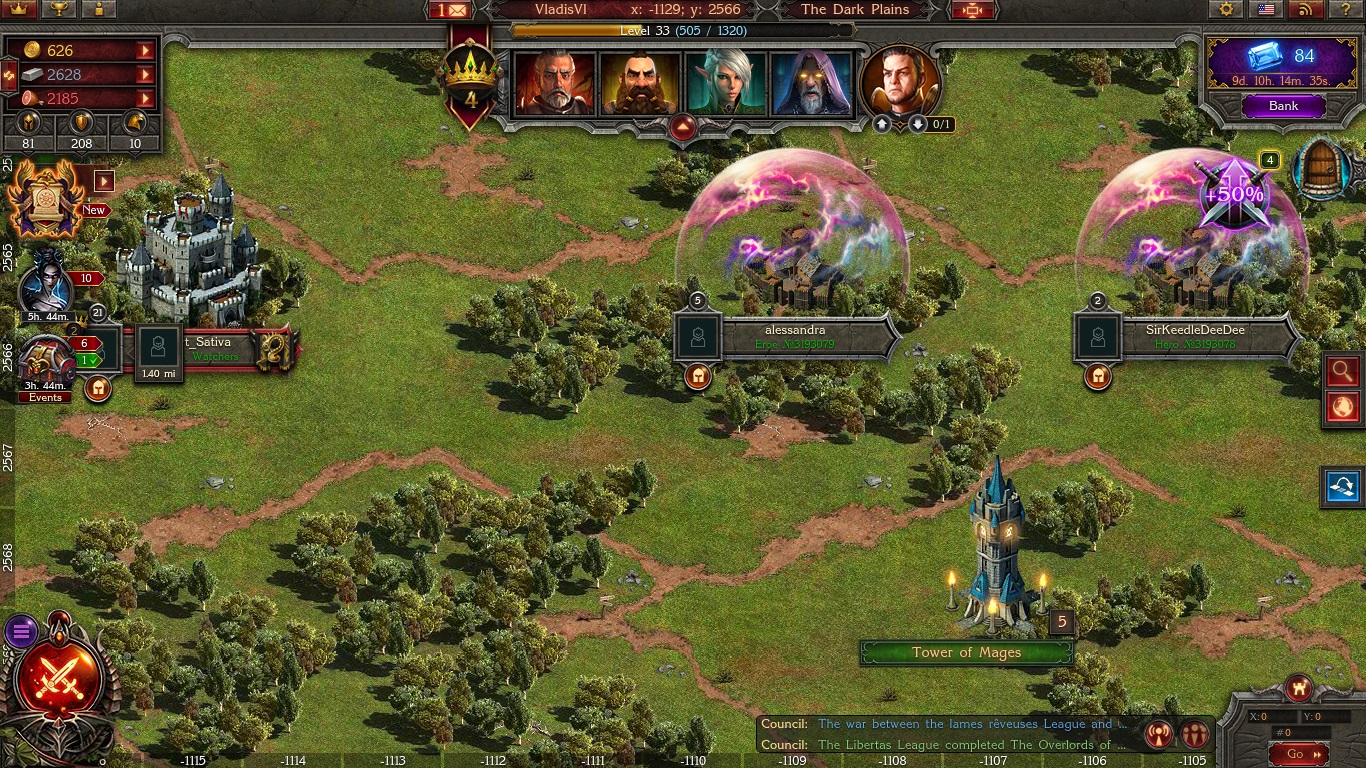