If you were disappointed about the announcements made by Sony during the PlayStation Meeting last week, and you are still looking to buy a current-gen console, you might be interested in Microsoft’s Xbox One S Battlefield 1 Special Edition Bundle.

We have picked this specific bundle because of its price and the bonuses you receive if you purchase it.

Furthermore, it can be easily compared with Sony’s PlayStation 4 Slim Bundle.

So, from the beginning you should know that the Xbox One S Battlefield 1 Special Edition Bundle costs $349.99 on Amazon right now.

This bundle will be released on October 18, 2016 but you can pre-order it starting today.

Now, let’s see what you get for this price.

First you get a brand new Xbox One S Special Edition 1TB Console which has a nice looking military green color.

You will also receive a digital copy of Battlefield 1 Early Enlister Deluxe Edition, a military green controller and a vertical stand.

In the same box you will also find all cables you need to start playing right away, and a 14-day Xbox Live Gold Trial courtesy of Microsoft.

Before moving forward, keep in mind that the console included in this bundle comes equipped with a 1TB HDD and a 4K Ultra HD Blu-ray.

If we remove the cost of the Battlefield 1 Early Enlister Deluxe Edition from the total price of the bundle you will get a brand new Xbox One S for exactly $270.03, since the BF1 Early Enlister costs $79.96 on Amazon.

Now, let’s say the vertical stand costs around $25.00 bucks, being quite similar to the one available for PlayStation 4 Slim and Pro.

This means that for $245.03 you can play 4K Ultra HD Blu-ray discs, on a distinctive military green Xbox One S with 1 TB of free space at your disposal.

Moving to Sony’s PlayStation 4 Slim Bundle, which also comes with a free video game, and sells for $299.99 on Amazon starting September 15, 2016.

In the box you will find the new PS4 Slim, one controller, all cables required to connect the console, and a copy of Uncharted 4: A Thief’s End.

Again we will remove the price of the game from the bundle, to get a total of $248.88, because Uncharted 4 sells for $51.11 now , since it was released earlier this year.

This means that the PS4 Slim alone costs with around 4 bucks more than the Xbox One S.

The problem is that the new PlayStation 4 Slim is equipped with a 500 GB HDD, and a standard Blu-Ray Player.

So, are you willing to pay an additional $3.85 for a console without a 4K Ultra HD Blu-ray player and with only 500 GB of free space? 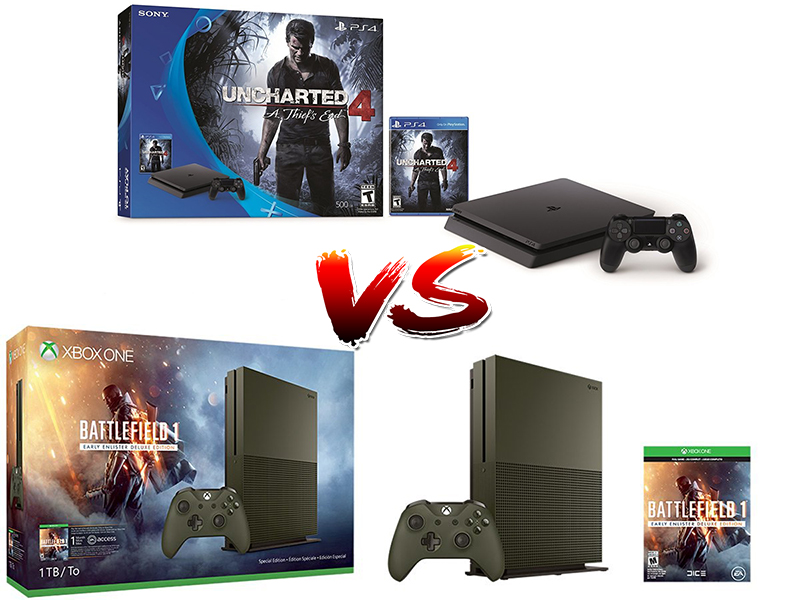