I started playing the original Titanfall just a few weeks ago – although I played the tutorial twice in the past (or even thrice). It is unfortunate for me that I picked up the game now, because I really enjoyed the multiplayer.

It was fun and fast paced, and I couldn’t wait to see what developers have in store for the sequel.

Titanfall 2 is a first-person shooter video game developed by Respawn Entertainment for PC, PlayStation 4 and Xbox One, and it’s the sequel to the first Titanfall video game.

When they first announced that the sequel will feature a singleplayer campaign I was more than curious, since I like sci-fi games, and to be honest, who doesn’t like playable mechs armed to the teeth?

The story puts you in the shoes of rifleman Jack Cooper, a young soldier who dreams to become a Pilot. His dream comes true sooner than he expected, since the Militia forces are ambushed by the IMC forces on a planet called Typhon.

His mentor and captain is defeated in battle and he’s forced to give Jack full control over his Vanguard-class Titan, BT-7274 (or simply “BT”). Together they must survive against impossible odds, in a mission that seemed as ordinary as any other.

The story is predictable at times and seems generic, being reminiscent of a plot that you can find in a ’90s movie. No matter, because the story is not about the destruction of the world as it would seem at first glance, it is about the bond between a Pilot and his Titan.

The relationship between Jack and BT evolves throughout the campaign and you genuinely become attached to your mechanized friend.

From time to time you can interact with BT by choosing a line of dialogue from two that are available, making you replay the section if you want to hear the other outcome.

Jack has some sense of humor in him, but BT doesn’t fully understand the notions because he takes things too literal, making his responses cold, which often leads to funny banter between the two.

The campaign spans across nine chapters with excellent level design, where every level feels that it could stand on its own. From lush jungles to factories and military facilities, it is clear that Respawn designed the levels for pilots and titans alike.

More than often you are separated from your Titan friend and are forced to fight your way back to him – I rarely got lost and felt the need to use the objective waypoint. Once you get back, the battlefield is filled with enemy titans.

A favorite of mine is Effect and Cause, which is the best level I’ve played in a long time in a (first-person) shooter, and probably one of the best ever.

In the said mission, you have a device that can manipulate time.

Basically, you switch between past and present at your own leisure, fighting enemies in both timelines and the environment at the same time, since some of the things don’t exist in the present or are damaged – it reminded me of Singularity or even TimeShift, both older games that involve time-travelling.

Another level that is worth mentioning is the one where you’re trapped in a massive manufacturing facility, where automated machineries assemble prefabricated houses. The twist at the end is that the pieces are put together to make an arena where you are forced to fight multiples waves of enemies.

While many games nowadays rely on the use of cover, Titanfall 2 encourages you to stay on the move if you want to survive.

It may take a while to learn the acrobatics, but when you start chaining double jumps and wall-runs you can clear a room full of enemies without them even knowing you were there – run and gun, words to live by. When things go crazy don’t forget that you have a cloaking device.

Chaining your traversal abilities together is a must in levels that feature various hazards like toxic sludge or electrified walls. However, BT’s assistance is mandatory in some of these places, like when you have to make your way through poisonous fog or when you need to jump across a huge chasm.

Titanfall 2 features a hefty number of weapons, making you experiment in every encounter in the game. On the other hand, BT might feel a bit underwhelming since you can’t switch its chassis like you do in the multiplayer.

That’s far from truth, because instead of the chassis, BT swaps its loadout on the fly. The loadouts can be found at certain points in the story and I found them more useful than their multiplayer counterparts.

The AI is a bit dumb and can be exploited at some times, but that doesn’t mean you won’t have to use your abilities in order to survive. Those dreaded Spectres killed me countless times on Master difficulty. 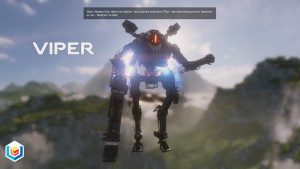 The bosses are members of a mercenary unit named Apex Predators, and each possesses a unique looking Titan.

However, I found the encounters underwhelming, since they rarely posed a greater threat over standard titans – except for that damned Viper.

But the gameplay is fluid and the graphics do not disappoint at all. While they probably could’ve been better, I prefer a steady framerate, without drops, instead of crisp textures.

The length of the story is around 4-6 hours, which is quite short, though normal for a multiplayer shooter. There are different difficulty levels and even a few collectibles in Titanfall 2, both adding to the replay value – if the story hasn’t convinced you during the first playthrough.

The campaign is a clear example of quality over quantity, and I am truly impressed how good it turned out to be.

While the singleplayer campaign stands out the most, the multiplayer received its fair share of changes. It feels like the same fast paced game, but everything else was rethought by Respawn.

The classic modes like Attrition, Team Deathmatch, Pilots vs. Pilots, Last Titan Standing, Capture the Flag or Free-For-All are back. Hardpoint has been converted to Amped Hardpoint, which is similar, only now you can “amp” a conquered point to double the income.

There are also new modes on the table. Probably the best of them is Bounty Hunt. In this mode both teams are pit against AI enemies which drop cash when killed. Between waves you have to deposit the cash in a bank. If an enemy player kills you before doing that, you lose half your earnings.

Another new game mode is Coliseum which puts you in a walled-off arena in a one-on-one match against another pilot. However, to enter the arena you have to buy a ticket with in-game currency.

The original Titanfall featured 3 titan chassis, whereas in Titanfall 2 there are 6 unique titans, each sporting a distinct weapon and different abilities.

You can no longer create a titan from scratch to your liking, but that’s not a bad thing, because now when you see a specific Titan on the battlefield you can quickly adjust your tactics knowing for sure whom you’re dealing with.

This isn’t the only area where the titans have been tweaked. Now every Titan starts without a shield and the damage that it takes is permanent. I’m not a big fan of this since it takes the feel of “one man army”, but it encourages team play given the fact you are more vulnerable.

Which leads us to the next change, the “rodeo” system.

When you rodeo an enemy titan you no longer have to start shooting, instead you automatically steal his battery, which can be carried to your own titan or a friendly one to repair some of the damage or even add a shield.

Rodeo again and you drop a grenade in the battery slot. If an enemy steals your battery you can kill him and retrieve it.

You unlock items through progression, but you now have to keep track of three different systems, and the game does a poor job at that. You have a pilot level, levels for each titan, and levels for weapons.

Instead of a standard XP system, your pilot levels up after you acquire a number of merits, which are given to you for completing various tasks, like winning the match or leveling up a weapon or titan.

The unlocks range from new weapons and attachments, tactical abilities, titan modifiers, to cosmetic items like banners, emblems or skins for weapons, pilots and titans.

The weapons and their attachments can be unlocked fairly quick to avoid putting you in a disadvantage against a player that invests more time in the multiplayer component of the game. However, I have the feeling that you have to grind too much to unlock the cosmetic items.

If you don’t want to wait, you are given the choice to access almost all level restricted items early by using in-game currency. Too bad you earn the currency at a slow rate, good thing you have a stock when you login for the first time.

A good call made by Respawn was the removal of the Burn Cards. Instead you have Boosts which are perks, powers or abilities. You can equip one – that is unlocked – at the start of the match and you can use it once you charge the same meter that you use for the titanfall (don’t worry, you don’t deplete the meter when you activate the boost).

The maps feel forgettable compared to the ones in the original game, but I am sure this will be fixed in a future DLC. I mark this as a good thing, because there is no season pass tied to the game, all future maps and modes being free.

This will prevent the community from splitting and if all goes well the multiplayer will last longer. Moreover, there are no microtransactions through which you can buy in-game currency.

The decision to drop the extra fees and the stellar singleplayer campaign will hopefully boost the sales. I say hopefully, because I am still scratching my head about why Electronic Arts though it would be a good idea to release Titanfall 2 between Battlefield and Call of Duty. It’s a shame, really…

For me, Titanfall 2 was the biggest surprise of the year. I expected a generic and boring campaign and the same multiplayer without any improvements whatsoever. Oh, boy, I was so wrong!

Disclaimer: We have reviewed the game on an Xbox One console. Our review is not endorsed by Electronic Arts and Respawn Entertainment, and we didn’t receive a free copy to review this title. We have purchased the game at launch, just like everyone else (and we would gladly do it again!).