Overwatch (OW) is famous for its seasonal events throughout the year such as Christmas, Summer Games and on top of these the most popular theme of Halloween. Like every year, Blizzard has released some new features of spooky new skins and the chilling return of Junkenstein’s Revenge game mode.

The Halloween Terror will be available till 31st October to play on PlayStation 4, Windows PC, and Xbox One. In celebration of the scariest time of the year, beware of the villains and monsters lurking around in the streets. You could take the time to watch your favorite team, learning from the professionals that compete while you place your best Overwatch bets.

Blizzard opened the Halloween season posting to Twitter, a poetic message of what you can expect:

There’s a rumor among explorers

About a monolithic lair

Heroes, how will you prepare?

All you need to know about Junkenstein’s Revenge

At a Halloween party, Reinhardt tells a horror story to McCree, Mercy, Soldier 76, Ana and Torbjorn. A tale about a Lord of a Castle who calls upon four heroes to defend the land and the gates of the Adlersbrunn Chateau from the wicked Dr Jamison Junkenstein and his army of Zombies. The heroes encounter assault from The Reaper who is the first enemy to make its appearance, having the ability to teleport and fire at close range towards his targets. Once Reaper was defeated, Junkestein’s Monster who continues to fight on but it was not long after he yielded to the active squad. The strong defences infuriated Dr Junkenstein who came out for personal revenge together with The Reaper who shows up again for vengeance only to be struck down.

The powerful Witch made her grand entrance, reviving her allies for one last attack on the forceful heroes who by that point were tired yet strong-willed to fight on till their very last breath. Not long after, Junkenstein’s creations, his allies and the doctor fell by the heroic team. The Lord praised the victorious champions on returning to the castle and gave them an award for their brave effort in defending Adlerbrunn.

There is also an alternate ending to the story that the heroes would take the fall in battle; the gates will blast open for Dr Junkenstein to get his revenge on the lord.

Although a tale, Junkenstein’s Revenge has returned as a game mode in Overwatch that takes inspiration from Mary Shelley’s novel Frankenstein. To play the game, you need to team up with three of your friends and face the frightful zombnics, zombardiers, Junkenstein played by Junkrat character, Roadhog as Junkstein’s Monster, Mercy as The Witch of the Wilds, and The Reaper as himself.

The revenge game has a choice limit of four heroes. These are McCree the Gunslinger, Soldier 76 as the Soldier, Hanzo the Archer and Ana the Alchemist. On top of these, you have access to play characters like Torbjorn the Viking, Zenyatta The Monk, Genji The Swordsman, Widowmaker as the Countess and Brigitte The Shieldmaiden.

In celebration of horrific theme, Blizzard got inspired by some of the Halloween classics like movies, monsters like Frankenstein to the misfortune in Friday the 13th. Below are a few of the best Overwatch skins this year.

The spooky, scary gunslinger sports a skeletal bandanna over his face with green eyes and his armour decorated with neon green lights as well as on his gun to match with the rest of his costume. To make his appearance look more real, he has holes in his cape to depict a zombie-like version of himself to blend in and trick as one of his enemies.

Most probably the best Halloween skin for Soldier 76, that takes inspiration from Friday the 13th character Jason Voorhees. The hero is not a slasher, but the Soldier has the same kind of hockey mask that Jason wears in the film. On top of this, his rifle can also be used as a chainsaw to keep with the Slasher themed costume. To help eliminate crowds of zombnics, Soldier 76 can use his helix rockets. The ability must reach its full potential in the best way, so when you have cleared out one side, control the centre for any more groups of zombies. 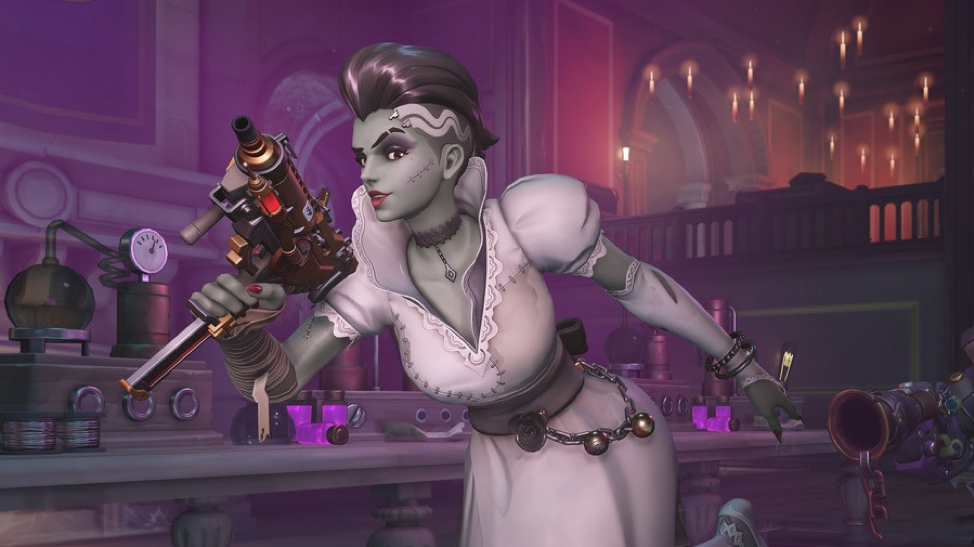 This year Blizzard has added to their Halloween skin for Sombra as Junkenstein’s Bride. Wearing a white dress and a new hairstyle of white streaks to go with the outfit resembles the Frankenstein’s Bride as well as the greenish tint in her skin. 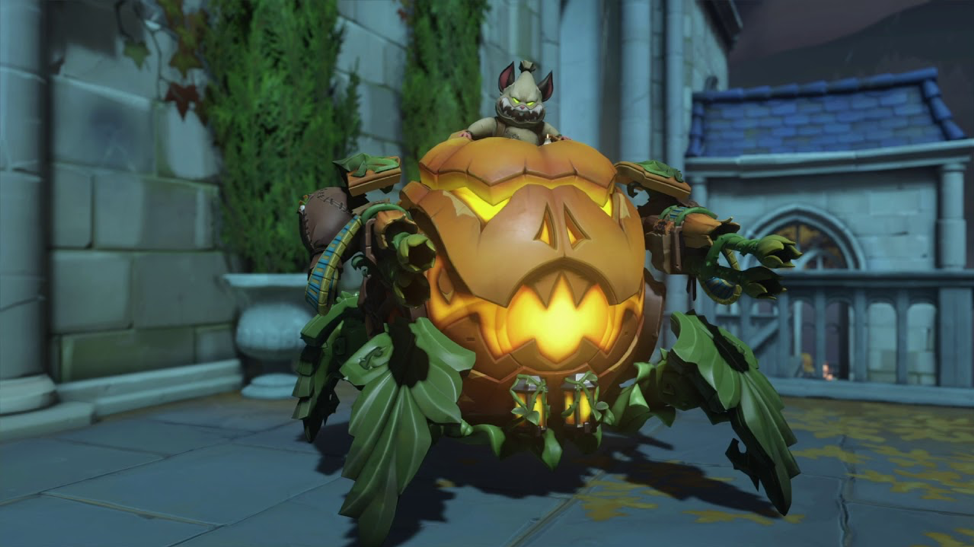 From a cute hamster, also known as the Wrecking Ball, Hammond transforms into a devilish monster with a jack-o’-lantern mechanical suit. The giant pumpkin skin suits the character very well and what makes him even scarier is the fact that the pumpkin can roll at a hundred miles an hour to hit targets.

This year’s Halloween theme was taken from horror movies from Frankenstein to Friday the 13th in fact, The Slasher and Bride skins as perfect examples. You are still in time to play the Overwatch Halloween game mode until the 31st October. To access the game on your mobile phone you can download the Blizzard Esports Mobile app. The application will update you with some insight, scores, event schedules and more while you can bet on Overwatch teams to win a small cash prize.