Grand Theft Auto V Bail Bond Missions are unlocked after the main quest named Mr. Philips, when Trevor can meet one of his friends, named Maude.

Maude it a GTA 5 Stranger and Freak and she only talks to Trevor. When you talk to her the first time, you will find out that she tracks down people that ran away to avoid prison.

However, Maude cant catch her without Trevors help, and she needs him to find them and bring them to her, dead or alive. Furthermore she is willing to pay a large amount of money ($10.000) for each prisoner that is brought back.

GTA 5 includes 4 Bail Bond Missions, which require your attention. From time to time you will receive texts from Maude, including details on your targets, such as their hobbies, or their last known locations.

When you receive these texts, you can locate the targets and decide how to approach them. The easiest way is to kill them; but bringing them alive is more interesting because you will have the chance to find their stories, and why they became wanted.

For the first Bail Bond mission in GTA 5, you will have to find and apprehend Ralph Ostrowski. Using the map below, travel to the area where Ralph Ostrowski is located (1) but dont get too close because he will spot you.

While standing on top of a hill, use the sniper-rifle to identify your target. The old man is close to a black jeep. If you alert Ralph Ostrowski you will have to chase him.

If you wish to kill him, you can finish the mission faster by sniping him, but you will miss the Wanted: Alive Or Alive achievement/trophy.

To catch him alive, snipe the tires of the black SUV, then the tires on the gray SUV, to prevent Ralph Ostrowski from using them to escape. Next, start running after him and switch to a nightstick. The stun gun can also help you catch him alive, but if you are too close, you will kill him.

Instead use the nightstick, and when you are close, hit him once.

Now, return to your vehicle and Ralph Ostrowski will follow you. Take him to Maude to get your reward and the next GTA 5 Bail Bond mission.

Larry Tupper is another man wanted by Maude, and he is Trevors second target. To find him, drive to the marked location on the map (Great Chaparral) and keep a safe distance so you can observe your target.

Locate a large barn, and in front of it you should see a black truck. Larry Tuppers exact location is in front of the barn. He has black hair and a shirt around his waist. If you cant identify him, you should know that he is the man on the left side while facing the barn.

If you wish to complete the second GTA 5 Bail Bond mission faster, you can snipe him, but if you want to hear his story, you will have to catch him alive. First, snipe the trucks driver and you will alert all of Larrys friends. Take them down one by one but avoid Larry who will hide behind the truck.

After you kill all of Larrys friends, sprint towards your target and he will start running. Switch to a nightstick and take him down.

Now, find a car and take him back to Maude.

After you catch Larry Tupper, Maude will send you another message containing the details on your third target: Glenn Scoville.

After you reach the peak of the mountain, walk south and look for a character wearing a yellow shirt. Notice that he has a camera and he records his friend, wearing a black hat.

When you approach them, you have two options: you can kill Glenn Scoville (wearing the black hat) before jumping, or you can take him alive. For the second option; however, you will have to jump after him. Start running and jump when you reach the edge of the mountain.

Open your parachute and follow Glenn Scoville all the way to the landing area. After you land on the shores of the sea, switch to a nightstick and chase him.

As soon as you are close enough hit Glenn Scoville and he will start following you. Steal a car, and take him back to Maude to collect your reward and receive your last GTA V Bail Bond Mission.

For the final GTA V Bail Bond Mission you need to catch dead or alive, Curtis Weaver. Curtis Weaver is an old man who lives in a hobo camp; even though he insists that he is not a hobo.

Curtis Weavers location is on the northern side of the island, as shown on the map below. Before entering the hobo camp, head to the hill above the tunnel that allows you to enter the camp and locate your target, on the right side of the camp.

If you have a clear shot and you want to kill Curtis Weaver, you will still get the reward from Maude, but you wont hear Curtis Weavers story. If you want to catch him alive enter the camp and head towards him. Eventually you will alert Curtis Weaver and he will start shooting.

Point a gun towards him, but dont pull the trigger. When he sees the gun, Curtis Weaver will try to run away, and the chase begins. Switch to the nightstick and hit him when you are close enough.

Next, find a vehicle on the road nearby and deliver him to Maude. 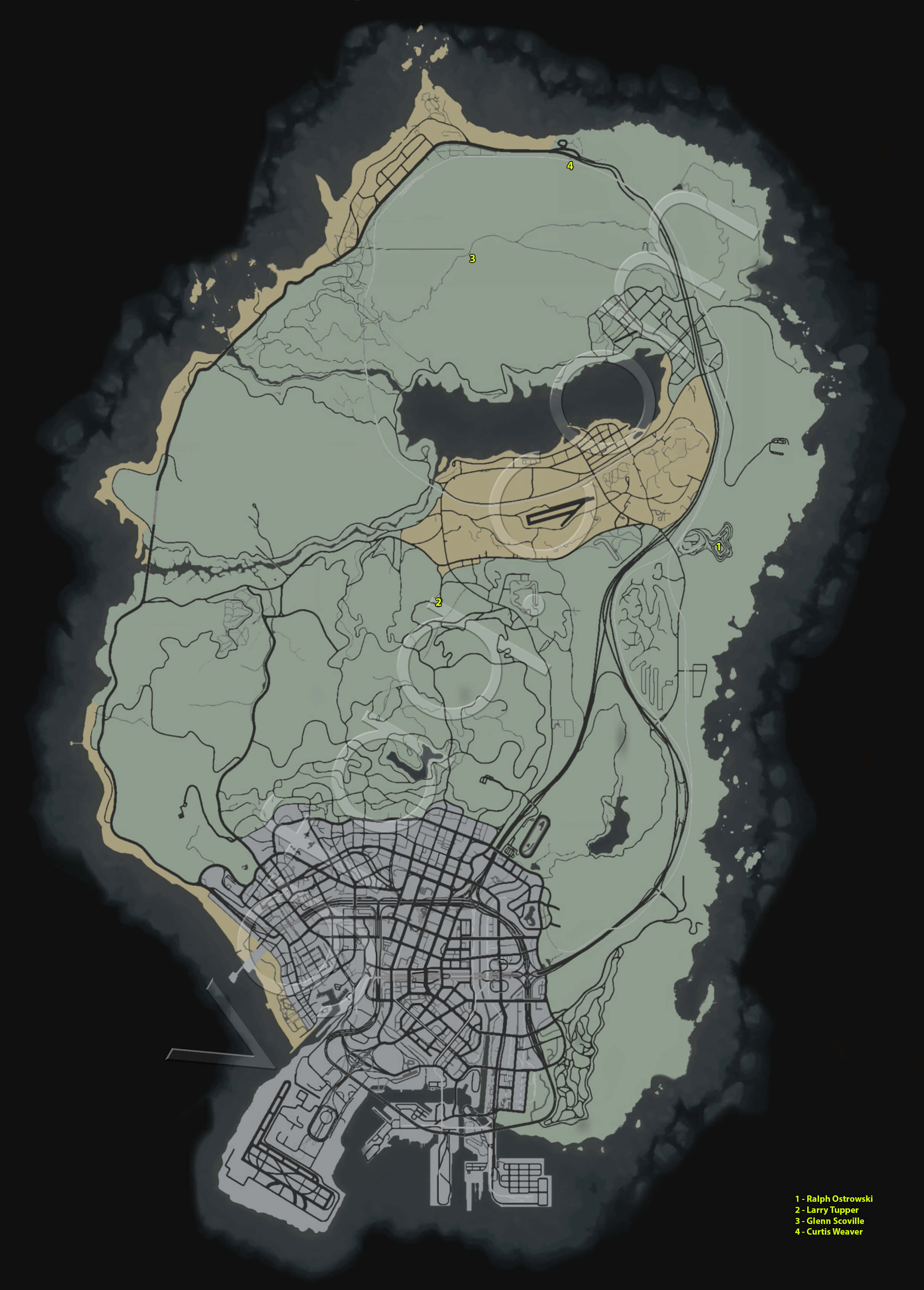