Lilith has tasked you retrieving the Vault Map from the Calypso Twins. But their headquarters is on the other side of Pandora! You’ll need to meet Ellie and unlock Catch-a-Ride first. 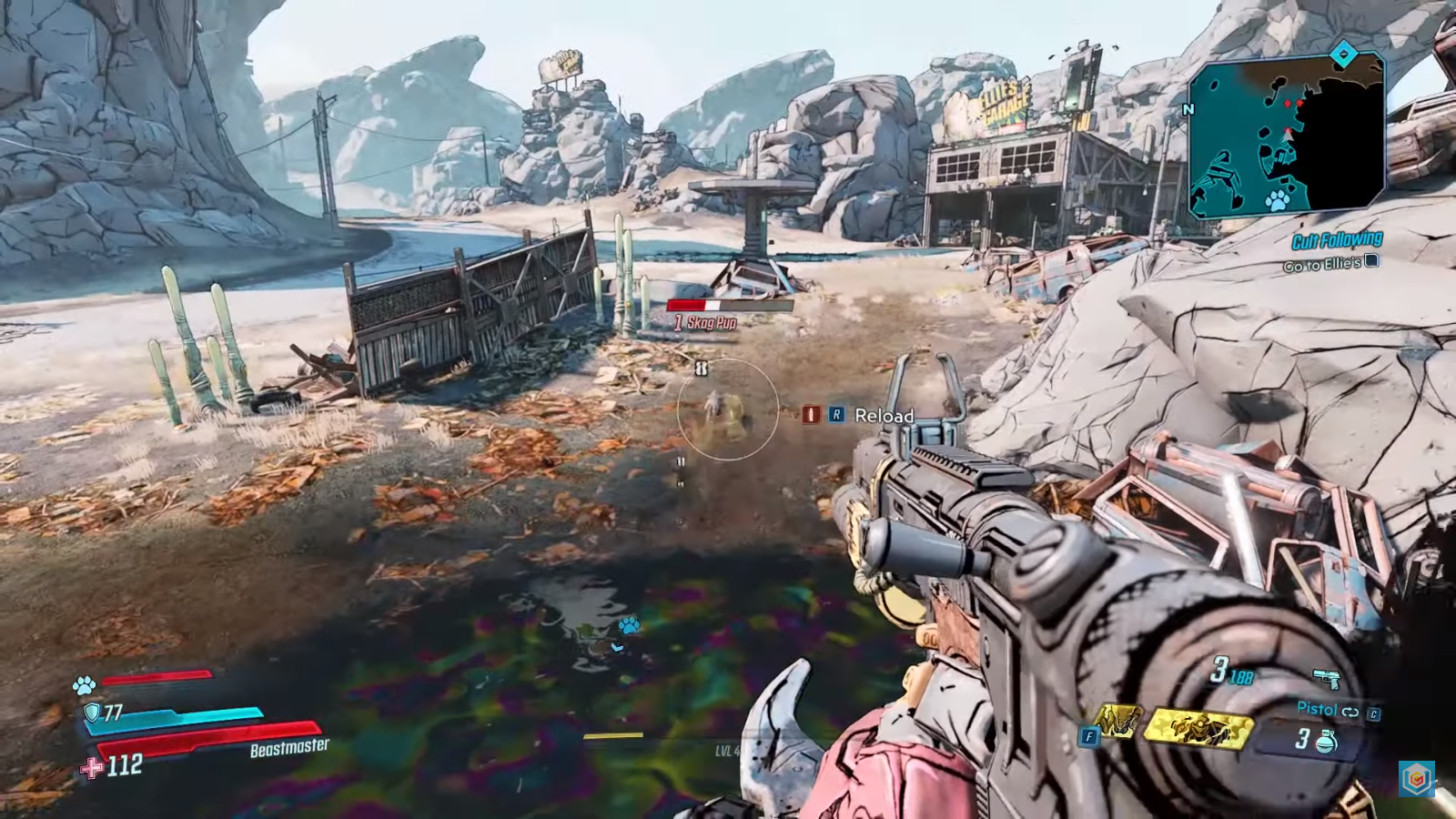 Follow the quest marker over the oil slick to the right of Crimson Raider HQ, optionally killing the Skags that always spawn there. Ellie is just past the out-of-order gas station. 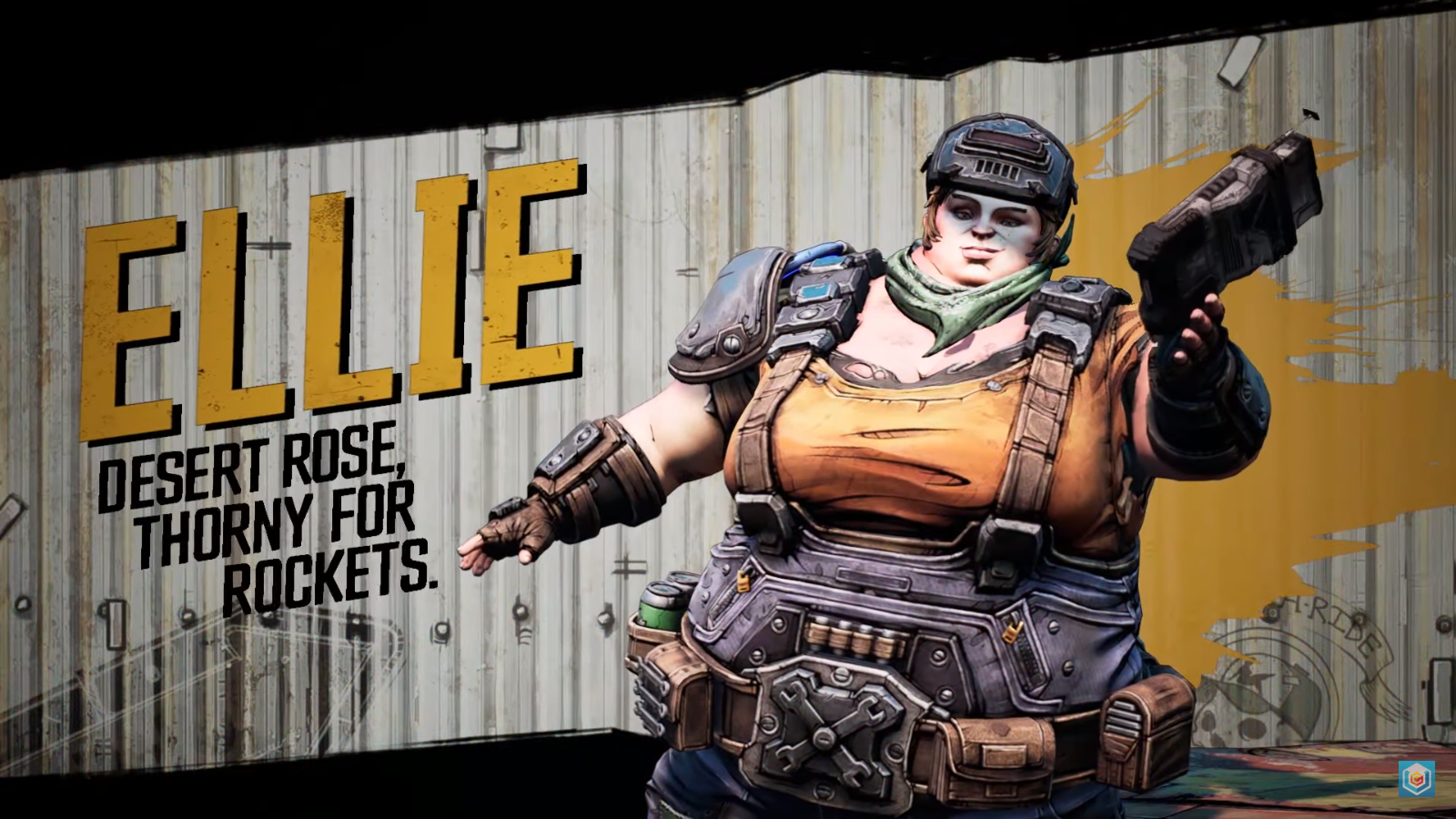 Ellie is more than happy to give you access to her Catch-a-Ride system, which lets you spawn a vehicle anywhere there’s a terminal. But first, you’ll need to steal a prototype to log into her system. 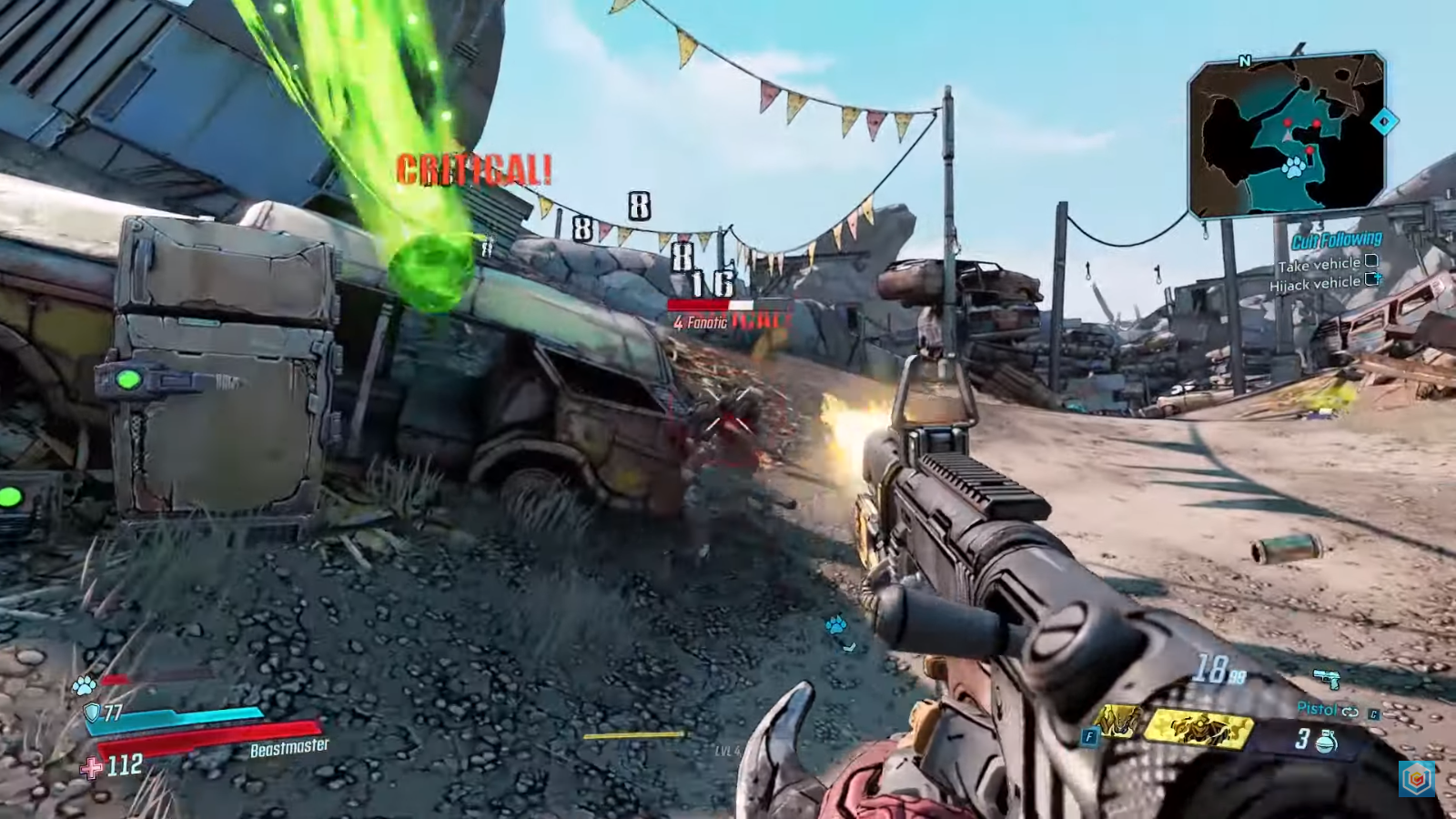 Enter the junkyard north of Ellie’s position. There will be some fanatics in your way you’ll need to kill. You’ll find some Jeeps doing donuts in a dusty cul-de-sac, ripe for the taking. You can hijack one by running up to it and pressing (by default) E. 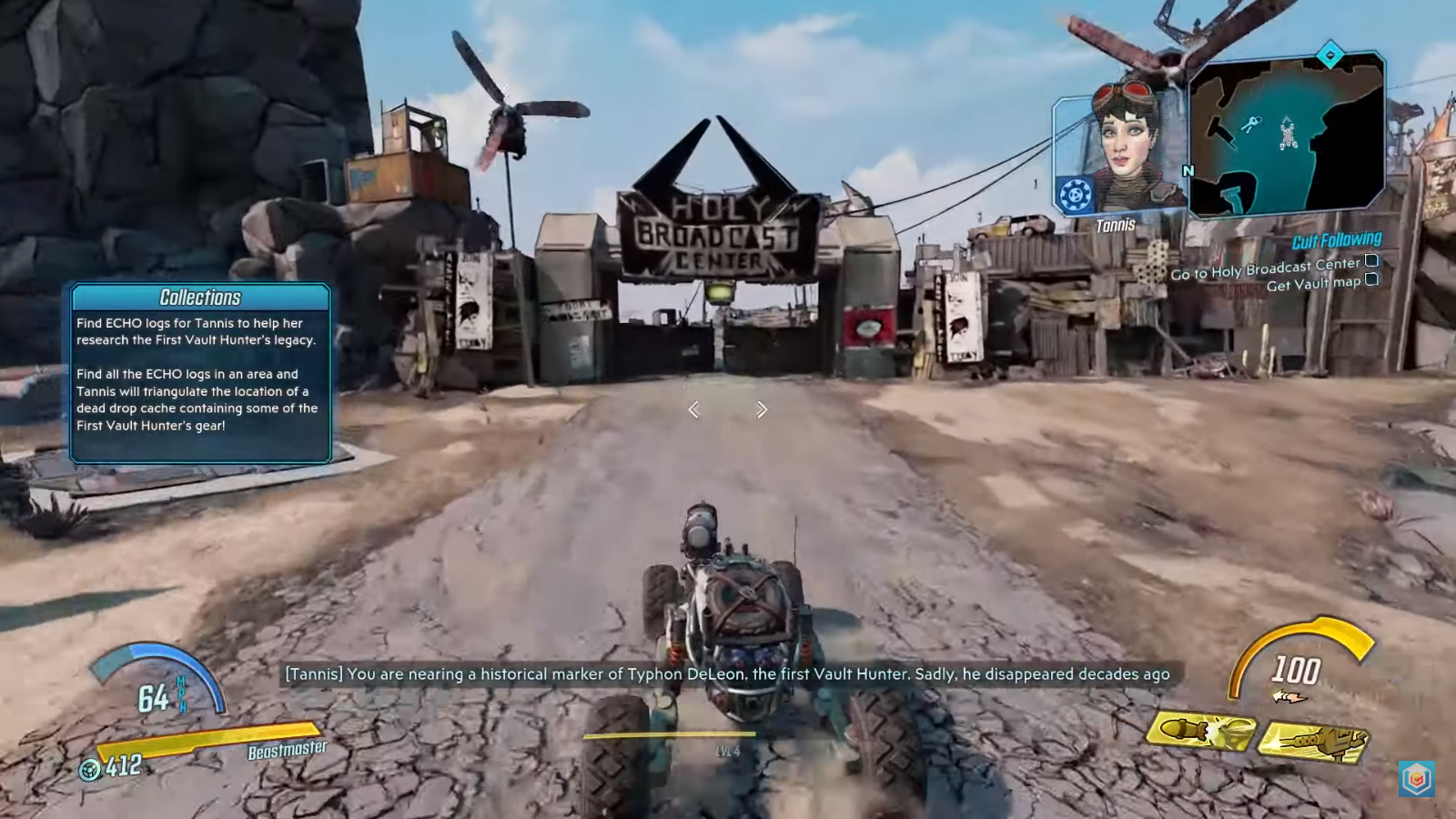 Return your stolen car to Ellie and park it in the Catch-a-Ride station so she can enter it into her database. Then take your car on a long drive to the Calypso’s home base. Bring up your map with Tab to make sure you’re going the right way, you’ll be covering a lot of never-before-seen ground before you arrive. 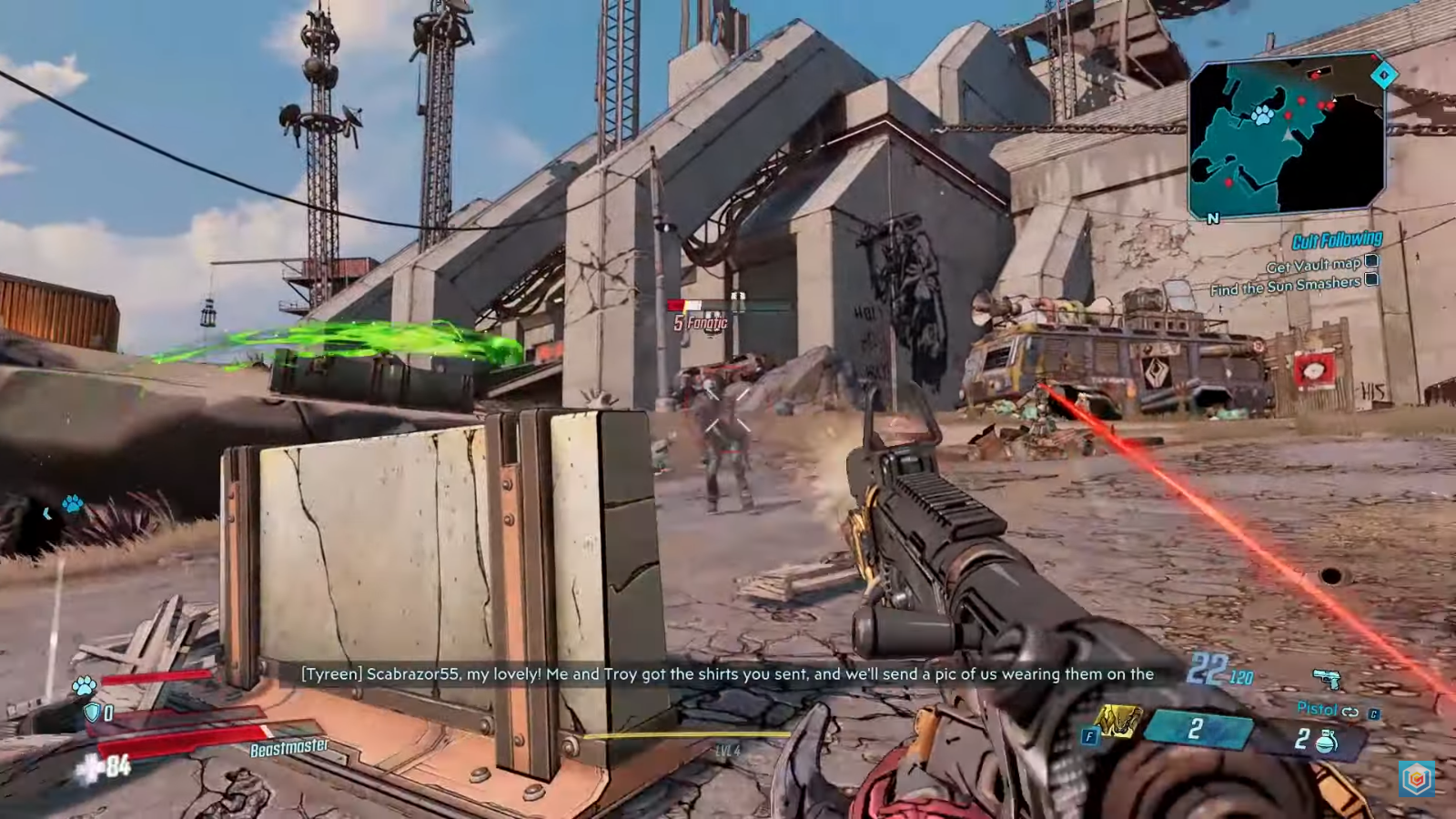 When you arrive, the Calypsos are having their daily “livescream” for their followers. Fight your way through the fanatics in the courtyard, which will likely take some time. Prioritize the turret in the very center, it’s the most dangerous target for sure. 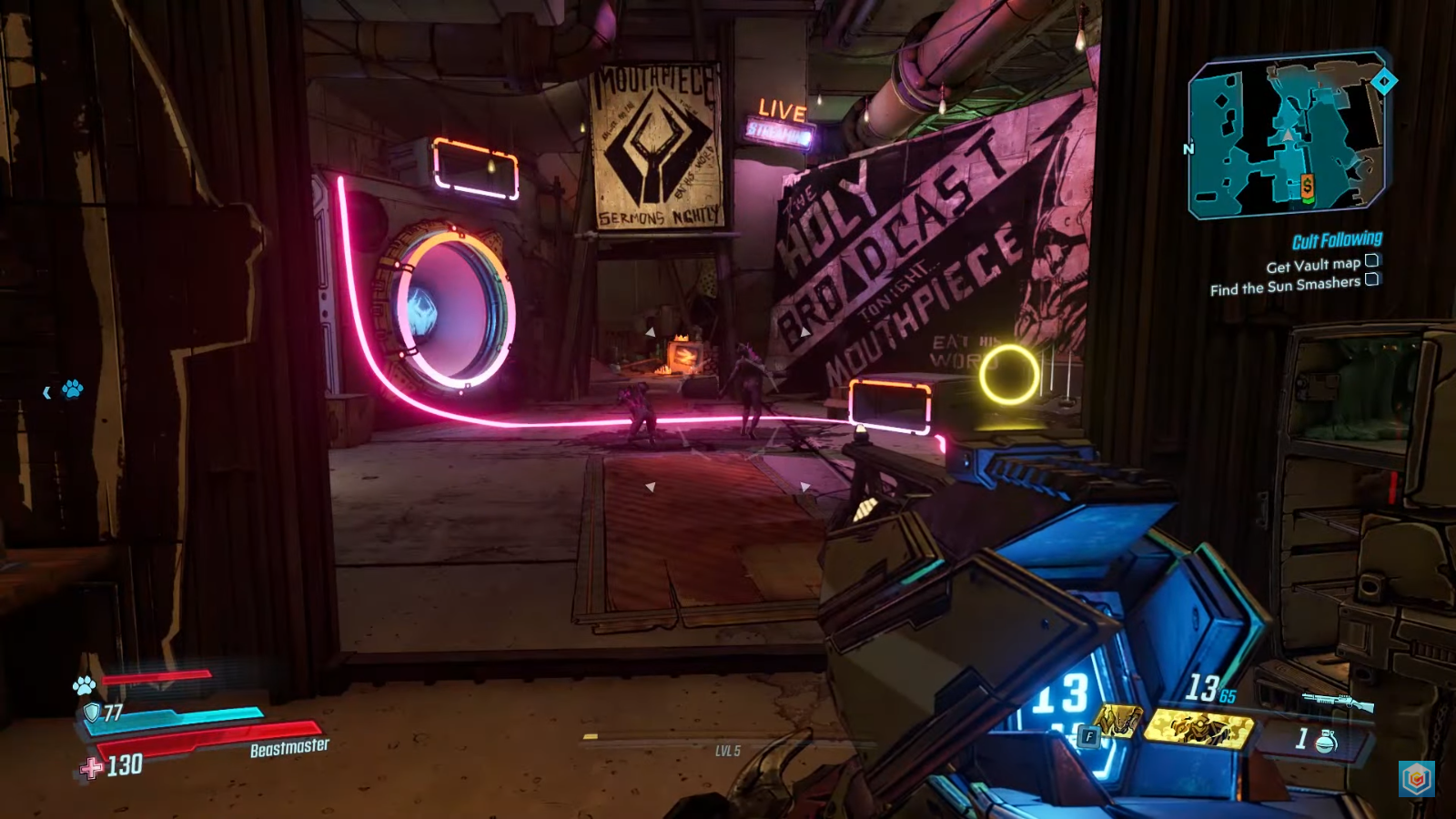 Once you reach the interior, beware of these massive glowing speakers. They’ll light up and fire a massive sonic blast when you walk into their room, which you’ll want to avoid by jumping back out of the room quickly.

There are more enemies to defeat inside, but only one way to go so you will eventually reach a room with a suspicious supply of vending machines, health syringes, and an irreversible drop into the room with the next boss, Mouthpiece. 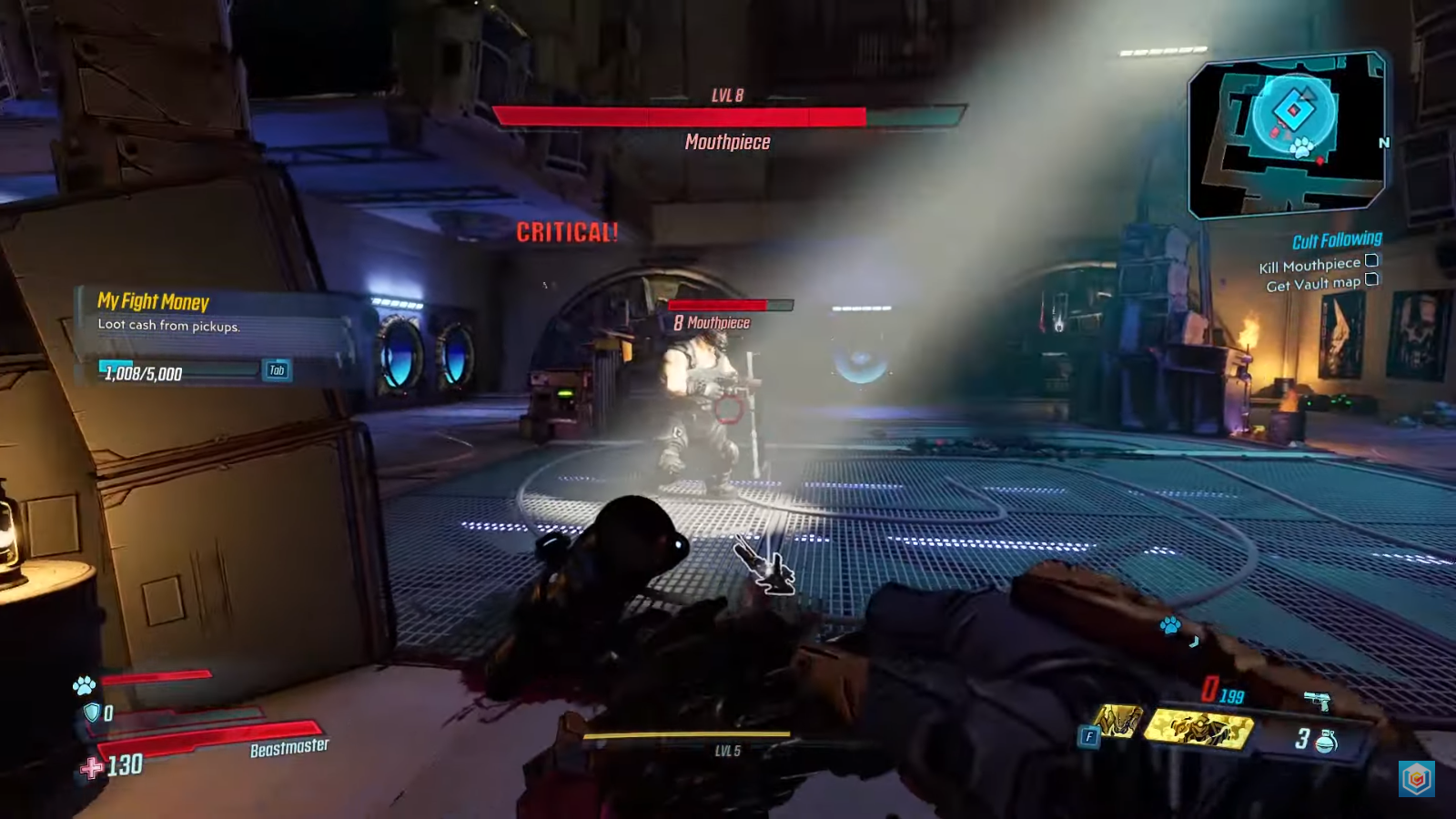 Mouthpiece is a hulking man with an impervious riot shield who summons waves of acolytes to help him melee you to death. His stage is surrounded by 4 walls of speakers (and the stage itself counts as a fifth) and they’ll each take turns lighting up and blasting everyone in that quadrant with debilitating sonic energy. Make sure to avoid them, while also dancing around Mouthpiece to get around his riot shield. Explosive weapons and grenades are useful for interrupting his footing, giving you an opening through his shield. 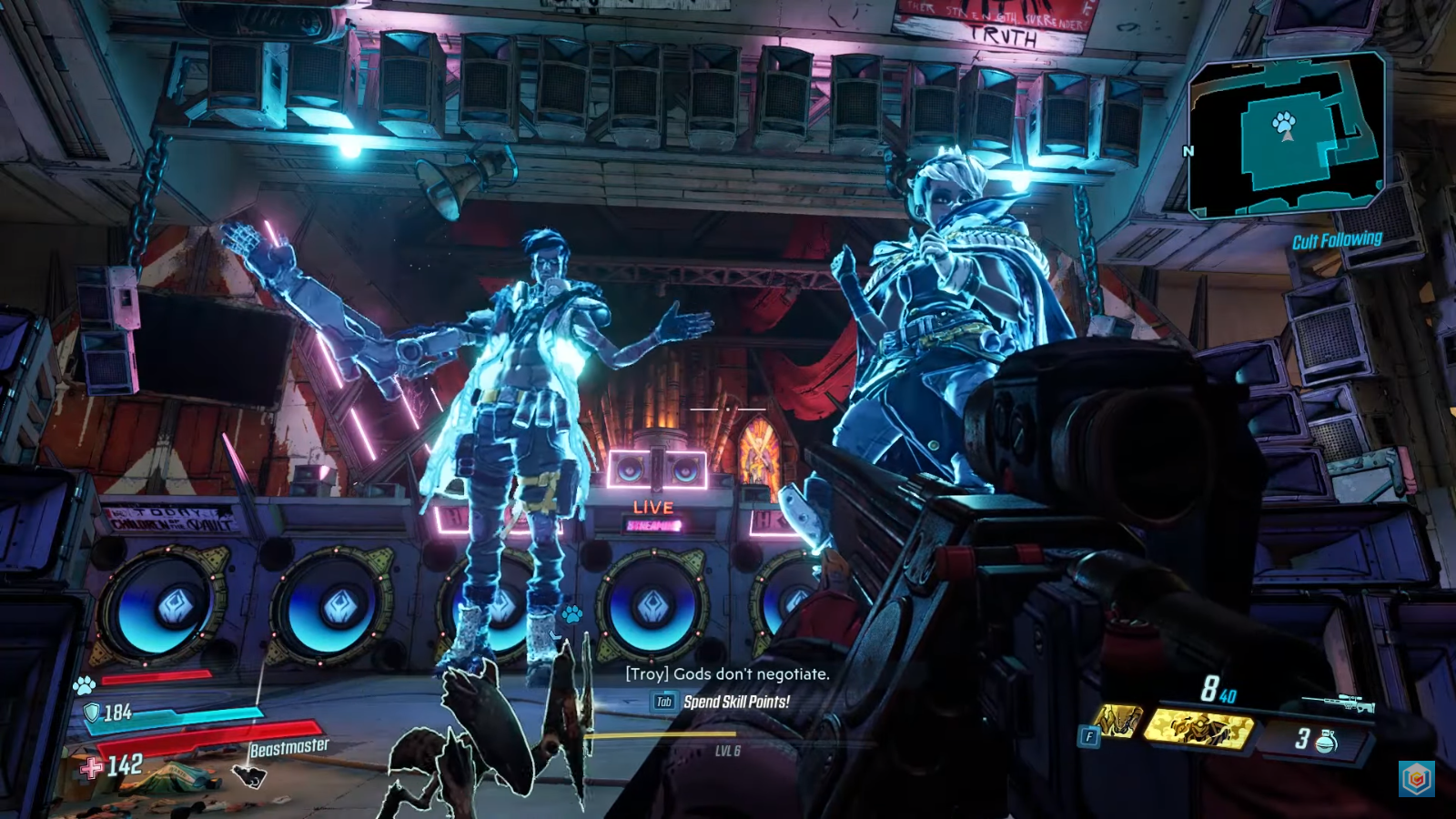 On his death, the Calypso twins arrive via hologram to taunt you and pretend they don’t care that you managed to retrieve the Vault Map from Mouthpiece’s corpse. Leave the base through the new exit unlocked behind the stage and follow the tooltips explaining how your newly-unlocked Fast Travel mechanic works. 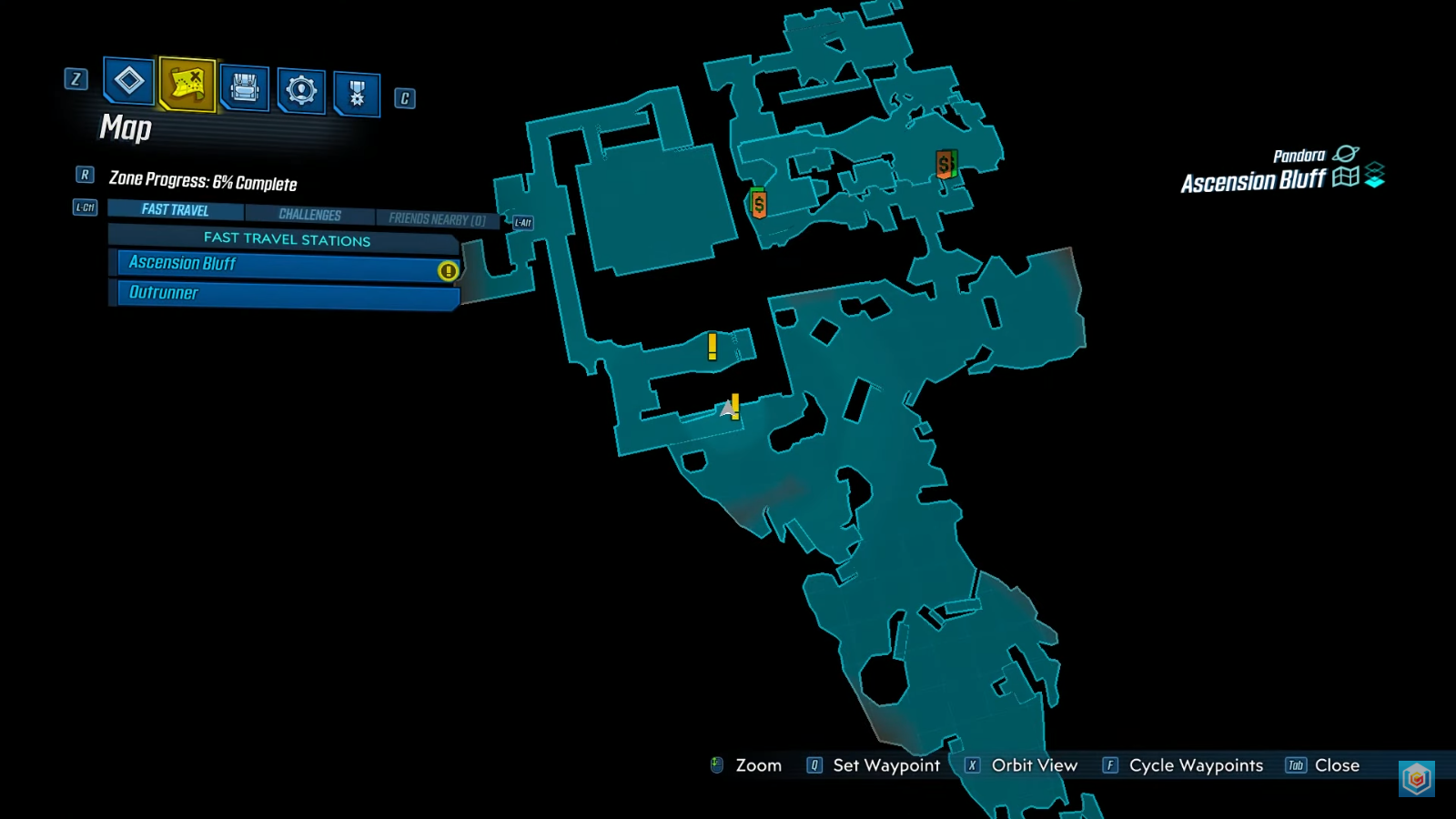 Hit Tab and select ‘Ascension Bluffs’, then hold down E to fast travel back to your car. It may take a few tries to get the hang of the fast travel map, but it’ll eventually become your best friend throughout your adventures. 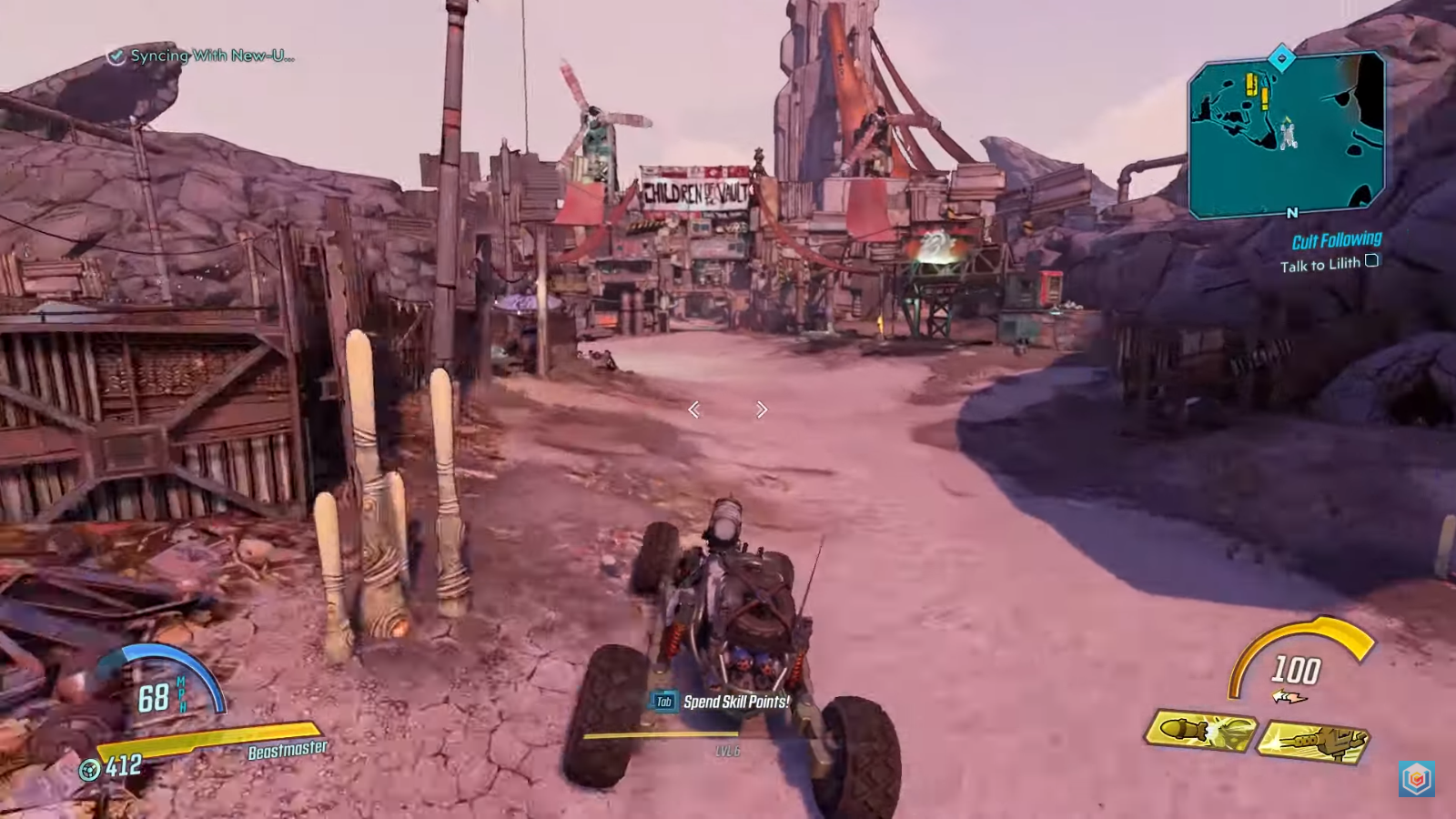 Drive your car back to Crimson Raider HQ and give Lilith the Vault Map. She’ll attempt to activate it, but for some reason it isn’t working. 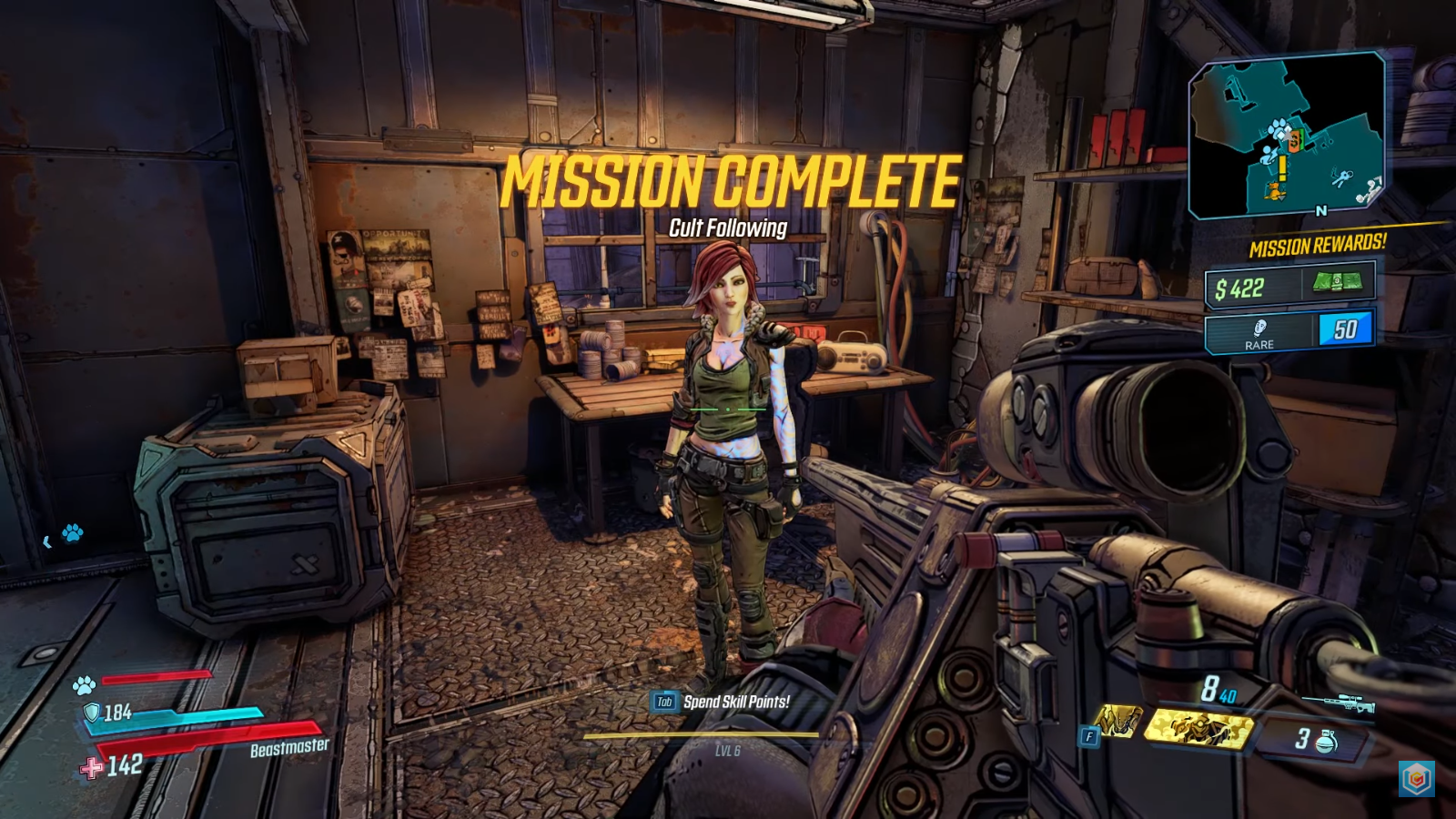 Lilith will realize that the only person who might know what’s wrong with the map is Dr. Patricia Tannis. Your next mission is to bring her the map and discover the location of the long-lost vault!