After we successfully finish the Best Minion Ever mission by speaking with Claptrap on his boat in Southern Shelf, the next story mission triggered is Borderlands 2 The Road to Sanctuary; which will actually begin in the next large area of Borderlands 2, called Three Horns Divide.

Sanctuary. The last free city on Pandora. Within its walls, you will find Roland, the leader of the resistance against Handsome Jack. You’ll also find safety, comfort, and at least a few people whose primary mode of communication isn’t delivered through the barrel of a gun.

As soon as we enter Three Horns Divide area using the exit from Southern Shelf by completing Best Minion Ever mission, the bridge in front of us will be blown and well receive an audio message that Sanctuary is off limits.

Because of that, first thing that we need to do is to go to the nearest Catch-a-Ride system (the waypoint on the map) and after killing the Bullymongs we encounter along the road, we try to use the system, only to find out that it is locked by someone called Scooter.

At this moment well receive a message from the Guardian Angel who tells us to get a Hyperion device so that she can unlock the system for us.

For that, we follow the waypoint through the giant fish skull nearby, and after dealing with all the enemies (including a new type), we search for a broken robot near one of the shacks to the left.

The Angel instructs us to plug it into the Catch-a-Ride system to activate it. We deploy a vehicle and then we use it to jump over the broken bridge (in order to be sure well succeed the jump, we can activate the boost system of the vehicle), and immediately after that we get instructions to go to Sanctuary to meet a character named Roland, who is actually one of the four playable characters from the original Borderlands game.

The road to the waypoint should be easy and fast enough, and we can also ignore the enemies we encounter on the way (or kill them for experience points), except those near the exit to Sanctuary.

It is better that we use the vehicles weapons to get rid of them, because we have infinite ammo on every vehicle. Now, we can speak to the gatekeeper to let us go inside Sanctuary. But instead of getting inside, we speak with Roland who asks us to go and find Corporal Reiss.

We use the vehicle to get to the waypoint, and when we arrive at our destination we investigate the road to find an ECHO recording and then we go to the next waypoint.

At some point well need to continue on foot and when we arrive at the pointed location we need to save Reiss from the attacking bandits. After speaking with him we need to get the Power Core and we also receive a secondary objective that involves the killing of 20 Bloodshot enemies.

To do so, we need to get to the Windbreak Camp.

It is best for us to try and kill as many enemies as we can using any method we prefer in order to accomplish the secondary objective. The Power Core can be found in a big chest at the top of the construction on the right side of the camp.

Tip: During our playthrough, we tried to snipe the enemies from outside the camp, and eventually, one of them dropped a Power Core. We can also find a Power Core in a shack on the left side of the camp.

Now we need to get back to the exit point to Sanctuary. We use it to get inside the Sanctuary area and we go to the building to our right to speak to Lt. Davis.

He tells us to remove the old power core (right behind us) and then install the new one in its place.

Talking to him again completes Borderlands 2 The Road to Sanctuary mission, unlocks the next chapter, and lets us choose between an Assault Rifle and a Shotgun. Also, it unlocks the Plan B mission in Sanctuary. 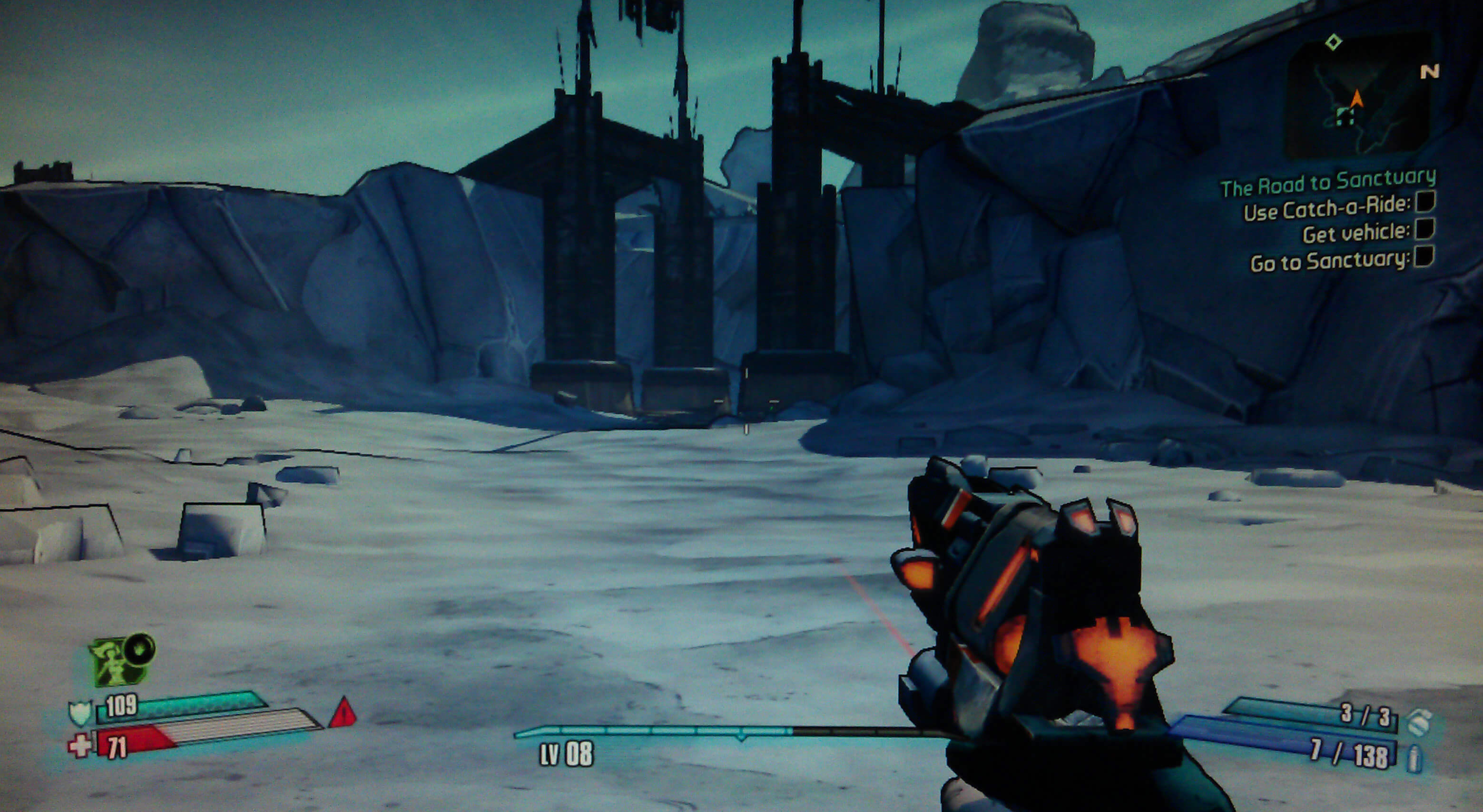