Borderlands 2 Perfectly Peaceful is activated if we speak with Sir Hammerlock in Sanctuary after finishing Bright Lights, Flying City.

For Borderlands 2 Perfectly Peaceful optional mission, we have to uncover the history of the crystalisks for Sir Hammerlock, while killing some other creatures in the process.

Sir Hammerlock is eager to find out how the crystalisks came to be. He is willing to pay you for evidence of their origins. Hammerlock has suggested you start looking in Caustic Caverns.

Borderlands 2 Perfectly Peaceful requires our presence in Caustic Caverns (if we havent visited it before, we may need to reach it via the exit point from Sanctuary Hole). Also, we should note that this mission has three additional objectives, which can be completed by killing a number of different creatures.

The numbers are as following: ten spiderants, five threshers, and five crystalisks.

The creatures count even if they are killed in other regions, such as the spiderants that can be found in The Dust area.

Tip: We can find some in a hive near the fourth evidence, before collecting it.

Plenty of threshers are in The Highlands region or Caustic Caverns. For crystalisk we either travel to The Fridge, or simpler, we can kill them while searching for the origin evidences in Caustic Caverns.

The first ECHO recorder is in a pile of rubble very close to the doors used to get inside the caverns (after the room with vending machines).

For the second piece of evidence we have to go to the Infested Warehouse region, a place swarming with varkids. The recorder is on one of the sides of a large column that sustains the ceiling.

The third recorder can be found on a tomb stone, in the northern side of Caustic Caverns area. It cant be missed; we just need to drop down from where the railroads are.

The last evidence is harder to find, because, even if it shows near the first one on the map, we actually have to go all the way around the map and enter the mining facility (we should note the fact that it is possible that the door may only open if we carry the mine cart from Minecart Mischief optional mission).

We drop down in the large room near the waypoint and then we enter through a couple of doors to find the recording near some human remains. There is also a back door that can be used if we come from Nether Hive region.

When we have collected all evidences, we can return them to Sir Hammerlock in Sanctuary to end the Borderlands 2 Perfectly Peaceful mission and continue to complete other quests presented in our full Borderlands 2 walkthrough. 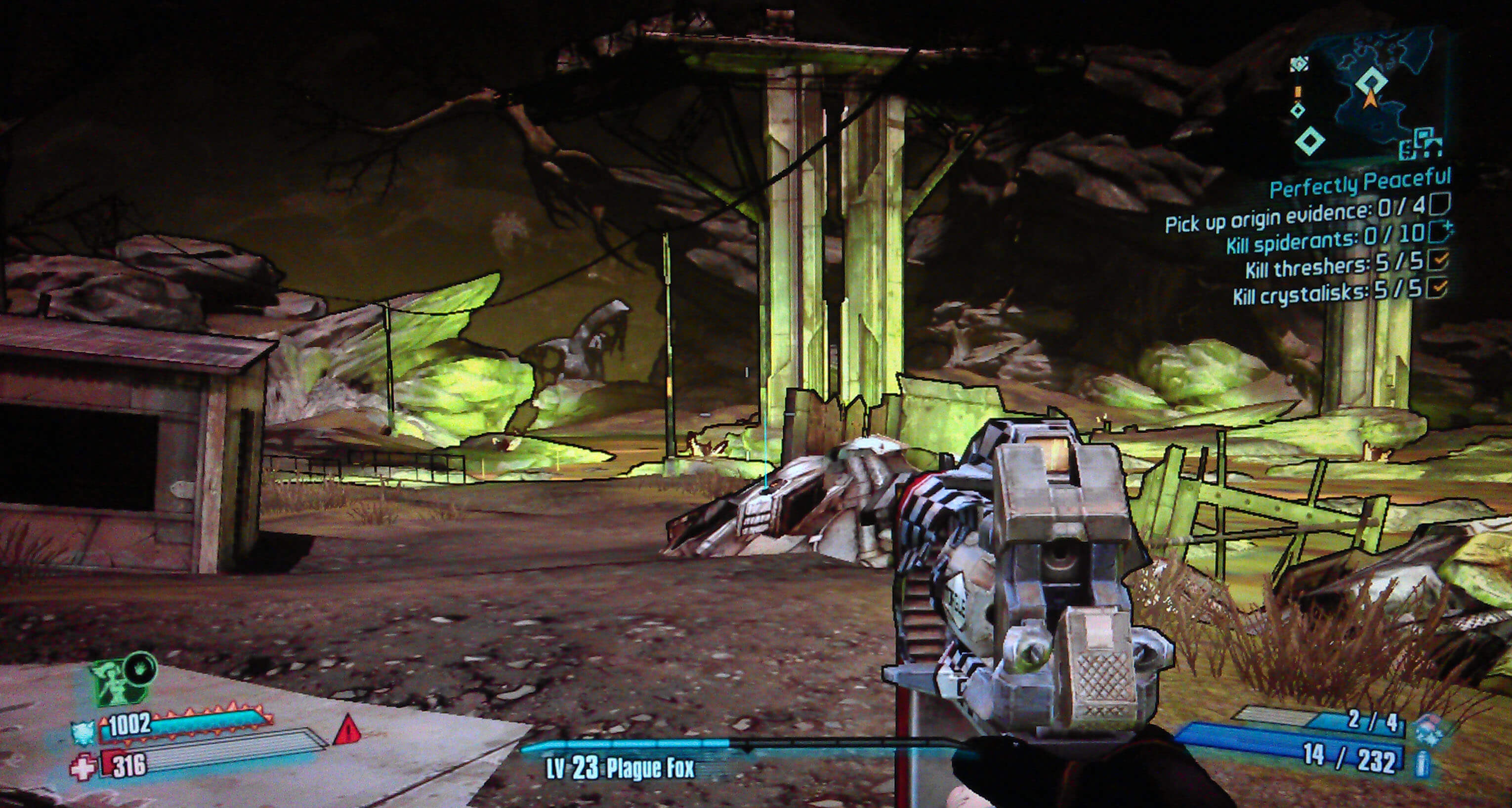