Borderlands 2 Bright Lights, Flying City is activated the moment we turn in Rising Action at the exit point from Three Horns Valley to The Fridge.

The Guardian Angel wants us to traverse The Fridge region in order to get to Sanctuary.

Borderlands 2 Bright Lights, Flying City mission actually spans over more than one area, and it may take some time to complete.

Sanctuary has disappeared. The Guardian Angel has asked you to head through The Fridge. If you can survive its horrors, the Angel says, you will be able to link up with Sanctuary on the other side.

Immediately after we activate Borderlands 2 Bright Lights, Flying City mission, the Angel will melt the ice for us so we can access the exit point to The Fridge.

Tip: After traveling to this area, we can go left to use another exit point, to Finks Slaughterhouse. In here, we can talk to Fink if we want to get an optional mission.

In this hub like part of The Fridge zone, we need to open the door in front of us, using the rotating wheel near the door. Once inside, we can clearly see that The Fridge is actually located inside a giant cavernous area. In here, the majority of the encountered opponents are the human rats, but further into this area we can find a new enemy type, called Volatile Crystalisk.

The crystalisks are extremely dangerous and must be avoided as much as possible, because they have a powerful slag attack. If we do happen to face one, we should know that his only weak points are the yellow crystals on his legs. Also, we should know that they drop gold nuggets instead of money when they die.

At the end of the path we have to follow, we open the blast doors (using the rotating wheel on the left side) and we get down using the elevator.

Now we can proceed to the next area, The Highlands Outwash.

As soon as we take a few steps down on the path, Sanctuary will reappear in the sky and Angel will enable the Fast Travel system, which has to be used to travel back to Sanctuary (the one thats nearby).

Unfortunately, Sanctuary is off the grid, but Angel has an idea on how to make it work again.

For that we have to travel to the Eridium extraction plant . In The Highlands Outwash area we can find the stalkers, a new enemy type thats extremely fast and can also phase shift to disappear from our sight, but we also find the robot loaders.

Tip: If we can predict the stalkers movement, we can shoot it even if hes invisible.

Once we reach the Hyperion Extraction Plant, we are given the objective to cross the waterway and pick up a lunar supply beacon. A loader will destroy the bridge controls, so our only option is to use the cargo loader (the conveyor belt). We climb the stairs, and we use the button there to call the cargo loader. When its on our side we jump on it, and then we wait to move to the other side.

When we get to the other side of the bridge, apart from the usual loaders and engineers, a powerful Constructor will come out through the gate. He performs various attacks, and just like in our previous encounters, we have to take cover when he uses the rockets and we need to shoot it using a high damage weapon.

If he kills us we will spawn near the bridge. If thats the case, we should use this to our advantage, because its easier to carry the fight from a safe distance (however, the common loaders will still fly on our side of the bridge).

After we finish with him, we advance towards our next objective in Borderlands 2 Bright Lights, Flying City. The thing is that as soon as we reach the beacon, a giant gluttonous Thresher will eat it. He is unlike anything we have seen so far. He can bury himself and can also recharge his shields.

His attacks are devastating, and its best to keep moving around while we shoot it. Some loaders will also join the fight, and the best strategy is to stay far away and let them attack the Thresher. While at a relatively safe distance, we can deplete his health bar at a slow, but steady rate (given the fact he fills up his shield almost instantly).

After we defeat him, we pick up the GPS-enabled beacon and then we kill the newly spawned loaders.

Next, we use the exit point to Highlands, which is nearby. Our new objective in Borderlands 2 Bright Lights, Flying City is to go to Overlook, but considering that Highlands is one of the largest areas in the game, its preferably to take a vehicle instead of walking.

Once were inside Overlook, we need to deploy the beacon to establish the Fast Travel link. Handsome Jack realizes Angel is helping us, so he sends in some reinforcements to destroy the beacon.

Our next task is to protect the beacon while it sends out the signal. The opponents are the robot loaders, but their fire is focused on the beacon, not on us; therefore, they need to be eliminated as fast as possible.

At one point, the EXP Loaders will spawn. Since their explosions can do a lot of damage to the beacon, they are now our top priority. The fight gets even tougher, with the addition of a Constructor, who needs to be dealt with immediately.

After he is killed, Jack will send everything he has to destroy the beacon. If the beacon gets destroyed we have to get next to it and press the action button to repair it. At some point, when we complete the objective, the fast travel stations around the map will be loaded with Sanctuarys new location.

Tip: At this point we might want to check the bounty board for a couple of optional missions.

Next we have to travel to Sanctuary using a fast travel station. When we arrive in this newly relocated Sanctuary, we spot a plethora of new optional missions marked on the map, and included in our Borderlands 2 walkthrough.

Anyway, its best that we first go inside Crimson Raiders HQ to meet up with our friends and talk to Roland.

This will complete Borderlands 2 Bright Lights, Flying City, and will trigger the Wildlife Preservation story mission. 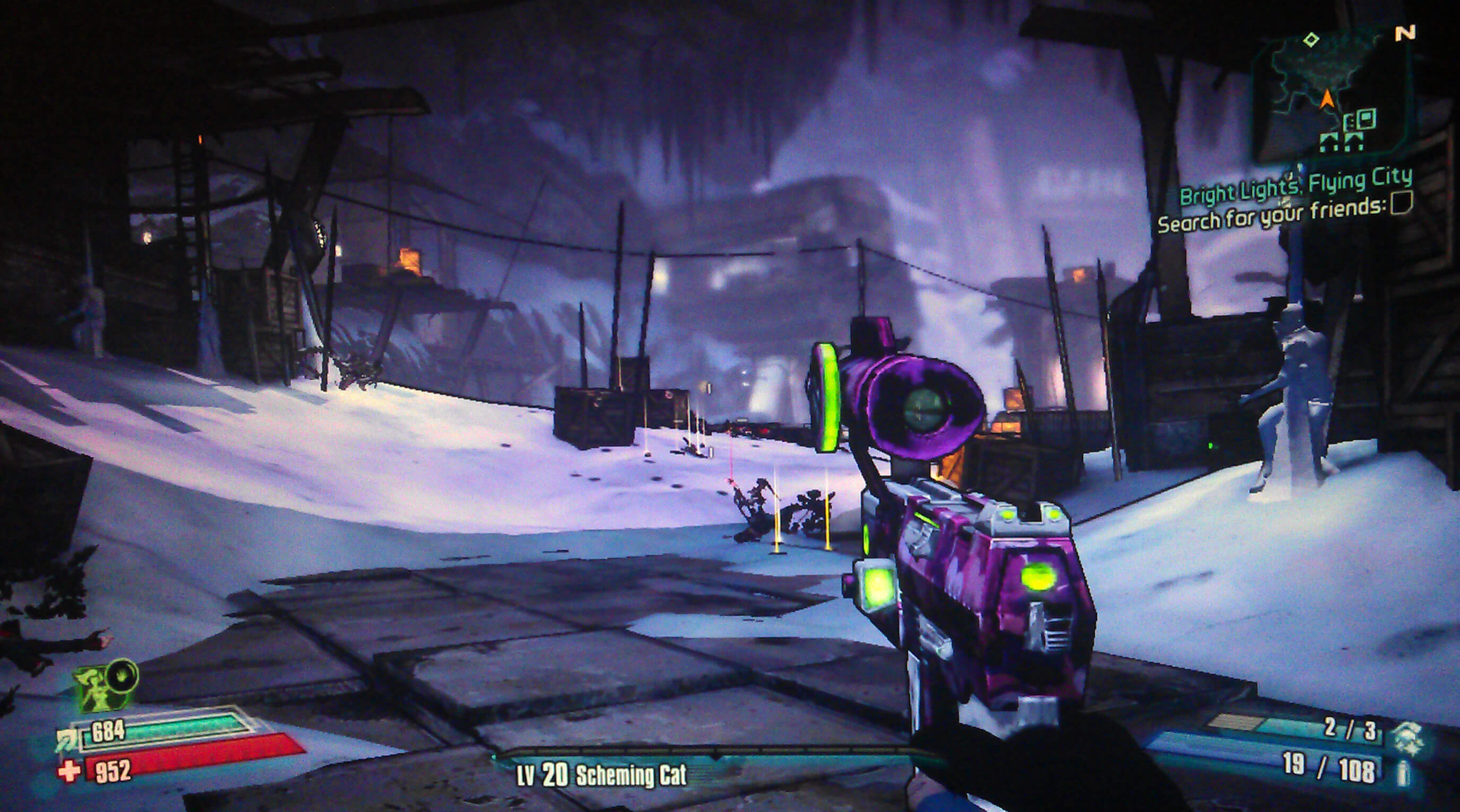