Borderlands 2 Breaking the Bank is a side mission we can activate if we visit Lynchwood after The Man Who Would Be Jack story mission. We can trigger the optional mission at the bounty board from the train station.

When we activate Borderlands 2 Breaking the Bank, Brick will tell us he loves three things: messing with the Sheriff, blowing up stuff, and stealing money from banks.

Therefore, in Borderlands 2 Breaking the Bank mission, blowing up the Sheriff’s bank and robing it seems to be the perfect job in his opinion.

Lynchwood has a bank. Brick has decided that banks were built for one reason and one reason only: to be robbed.

After we pick up Borderlands 2 Breaking the Bank and we go outside, we can clearly see the bank on the left side, right near the train station. The first objective is to check the rear entrance of the vault, but before doing that, we might want to clear the area of bandits. Obviously, our access is denied.

However, Brick seems to have an idea that involves a bomb coated in skag bile, and for that to work, we first need to get some laxatives. The laxatives area easy to find in a toilet on the roof of the building located behind the bank (and behind us, if were still at the vaults door).

Getting on the roof is another story, because we have to make it to the Saloons roof nearby, and then make a jump to the other roof while running.

Next, we have to go south to get the explosives from a bandit named Mad Dog. He is in Death Row Refinery, where we have to eliminate the opponents before meeting him, especially the lab rats that can be fatal at close range.

Mad Dog is an enemy that throws explosives, thus its best to move around a lot and kill him quickly with a high damage weapon. When hes dead, we pick up the highly volatile explosives and then we head to the next waypoint, in The Grinders region.

Here, we place the bomb near the small train tracks, and then we coat it with the laxatives. A pup skag will come out from the hole and eat the bomb. We just have to follow him and after he throws up we search the skag pile for the bomb.

Once we have the bomb, we return to the bank and we blow the vaults door. As soon as we place the explosives on the door, enemies will come outside from the buildings nearby and from the vault as well. We deal with them, and then we go inside to loot 25 deposit boxes.

Now that we have the cash, we need to make a run to the other side of the town and climb the stairs to get out of the city. When we reach the top, the Sheriffs posse will attack us, and will continue to search for us until we hide the evidence.

The posse in Borderlands 2 Breaking the Bank is made up from bandits who ride armored skags, so we want to move around as much as possible when dealing with them. Then we can place and bury the loot at the three marked locations.

The first one is under the big conveyor belt, and when we climb on it, the Sheriffs men will come after us.

The second spot is inside the mining tunnel, and once again, after we bury the loot, the Sheriffs posse will attack us. The last hiding spot is under a platform that leads to a building.

After we hide the evidence, the Sheriff and Brick contact us, hence we have to return to the bounty board to turn in Borderlands 2 Breaking the Bank and get the next one that becomes available, the mission called Showdown. 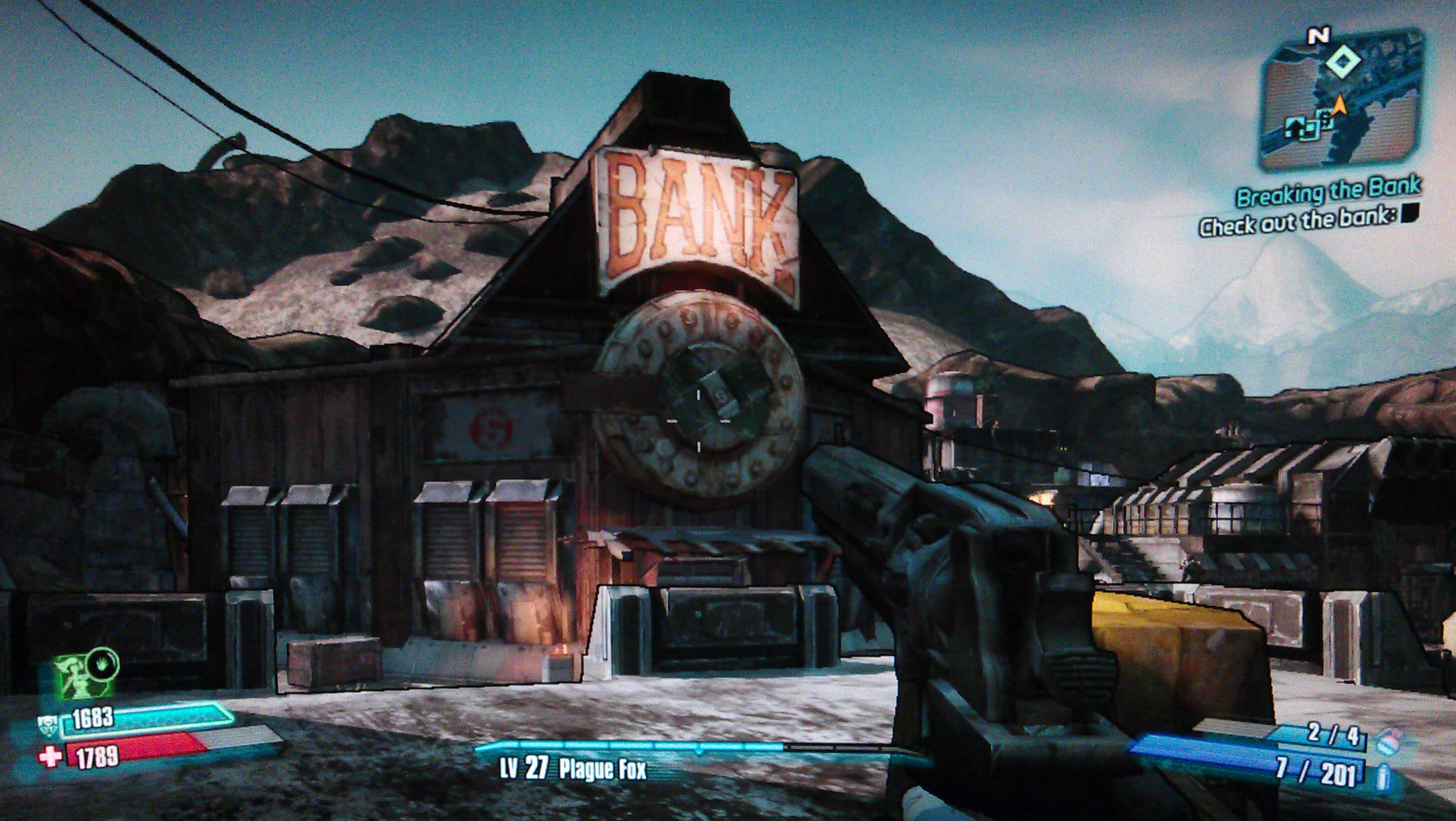