Borderlands 2 Assassinate the Assassins is an optional mission that can be activated from the Bounty Board in Sanctuary, and is available after completing The Road to Sanctuary story mission.

Upon accepting Borderlands 2 Assassinate the Assassins, Roland informs us that he needs to get rid of four highly trained assassins, located in Southpaw Steam & Power, from the Three Horns Valley region.

Roland suspects that four Hyperion assassins are hiding out in Southpaw Steam & Power. He asked any Crimson Raiders in the area (that means you) to find the disguised assassins and kill them.

First, we need to go to the waypoint in Three Horns Valley area (we can use any of the two exit points located on the map of Three Horns Divide, but the one to the south-west will take us closer to our objective).

We enter the facility and after dealing with the enemies in the courtyard we go inside the building and we use the exit point to Southpaw Steam & Power.

The first target that needs to be killed in Borderlands 2 Assassinate the Assassins is Wot. Talking the higher path in the facility will lead us to Wots location. He comes out through the gate accompanied by a badass psycho that needs to be killed fast. This mission also features some optional objectives, meaning that well have to use a specific weapon when we murder the assassins.

Wot has to be killed using any kind of pistol, but first we need to drop his shield using a shock gun, and then switching to a fire pistol for better results. After he dies, he drops an ECHO device that we have to pick up.

We advance in the building to find Oney, the second assassin. He needs to be killed using a sniper rifle, so a good strategy here is to take out all the enemies before reaching the gate, from which he comes out. We get near the gate and then back where we came from.

We eliminate the lesser enemies first and then we try to kill Oney using a sniper rifle.

He is more powerful than the first boss and deals a lot more damage to us, so using a fire sniper rifle (after dropping his shield using what method we prefer) should kill it faster than using a regular sniper rifle. After listening to the ECHO recording he drops we can move further.

On the lower level is best that we kill the enemies keeping a safe distance, because if they shoot the barrels that are in the room with the waypoint, we can take a great amount of damage and even die.

Reeth, the third assassin, might be tricky to kill, because the optional objective requires to be killed using a melee attack. When the gate opens, Reeth will come out with a powerful Nomad Taskmaster.

The nomad will advance slowly, while Reeth will come to melee us. If we have a good weapon we should try to kill the nomad first, because when Reeth is out of his melee range he throws with fire axes.

Its a good idea to use a shock weapon to drop Reeths shield and then carefully lower his health bar using any weapon that works better for us.

When his health is low enough we could go and attempt some melee attacks on him. When he dies, we pick up another ECHO device and then we continue our exploration towards the next waypoint.

Rouf, the final target in Borderlands 2 Assassinate the Assassins, needs to be killed using a shotgun. After we get rid of the enemies in the final room, the large door in front of us will open.

The two Nomad Taskmasters can be killed using a fire weapon. Roof will use a sniper to eliminate us, so we need to go after him and get close so that we can use a shotgun (preferably a shock shotgun). We pick up the ECHO device when he dies, and we open the gates to exit the facility.

Now all we have to do is to go back to Sanctuary and turn in the Borderlands 2 Assassinate the Assassins mission at the bounty board in town, and choose our reward (a pistol or a SMG). Next we can focus on other optional missions in Three Horns Valley. 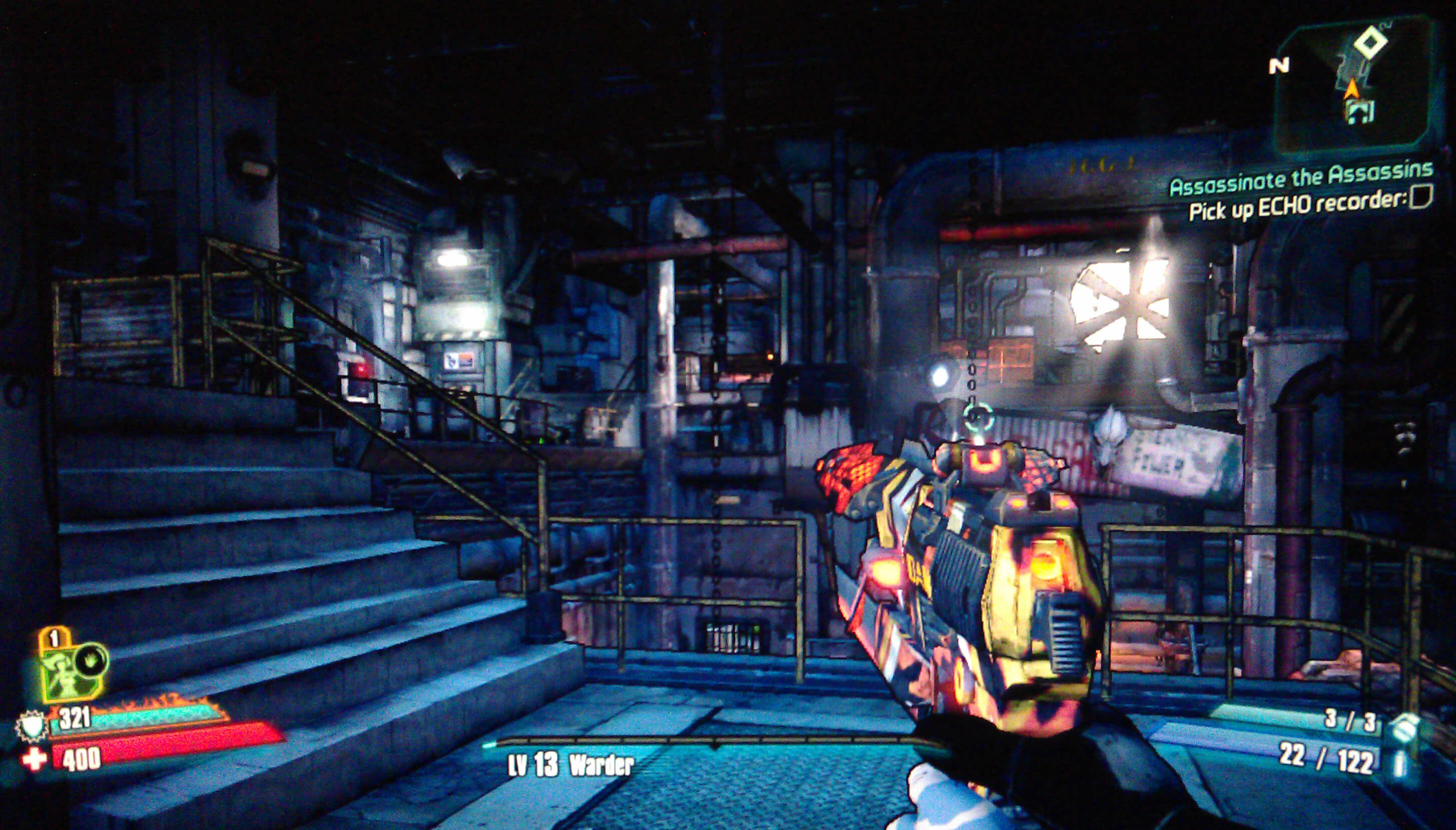