Borderlands 2 A Train to Catch, is given to us at the end of A Dam Fine Rescue, when we save Roland from the Hyperion prison.

In Borderlands 2 A Train to Catch, on account of Rolands rescuing, we have to discuss and make some plans on how to strike back Handsome Jack.

Roland, the de facto leader of the resistance against Hyperion and Handsome Jack, has been kidnapped by the Bloodshot bandit clan. This is a bad thing. Lilith has instructed you to infiltrate Bloodshot Stronghold and break Roland out. Simple!

In Borderlands 2 A Train to Catch, our first objective after saving Roland in Friendship Gulag is to go back to Sanctuary and speak with him about how to defeat Jack. Talking to him (hes with Lilith on the balcony of Crimson Raiders HQ) reveals us that Handsome Jack doesnt want to open the Vault; he wants to control it, because the Vault is actually a powerful ancient Eridium Warrior.

However, to open the Vault we need the Vault Key, which happens to be in possession of Handsome Jack, so in order to learn how to get it; we have to go to talk to Rolands spy, located in Tundra Express.

When we arrive in the new area named Tundra Express, Roland will tell us to use a fire weapon to ignite three varkids in order to wake up his spy.

As easy as it sounds, this might actually prove tricky, because the three varkids must die at the exact same moment, so we need to shoot three of them to set them on fire, but before they deplete their health bars.

Completing this objective in Borderlands 2 A Train to Catch will trigger a cutscene where we meet Mordecai, the third playable character from the original Borderlands game.

In order to get the key we need to highjack a train, so our next task is to go and meet Tina. From now on, Mordecai will help us by using a slag sniper rifle on the opponents we encounter.

The entrance to Tiny Tinas Workshop is around that central area where Mordecai is, in the north side of the region, through a large door. Inside we meet another NPC of the game, Tiny Tina.

She knows how to get the train, but before telling us how, we have to get find her two badonkadonks stolen by the bandits.

This means we need to go to Buzzard Academy, an enemy base located in the western side of the map. The base is filled with human opponents and buzzards, but this should not be a hard fight considering that Mordecai is also giving us a hand with some of them.

Although we could wipe them all out, our attention needs to be focused on the two badonkadonks, which are actually some powerful explosive charges.

We return the charges to Tina, we get out of her workshop (after speaking with her), and a few moments later we get our next task in Borderlands 2 A Train to Catch. We pick up the two damsels which she built (the stuffed animals), and then we can finally proceed with our train highjack.

We go to the waypoint, we climb the ladder, and then we set up Tinas damsels at the pointed locations. After placing them in their spots, we arm their charges and we wait for the Hyperion train to come. The train will derail and we will have to climb the broken bridge to go to the wreckage site by using the exit to End of the Line.

In End of the Line we find the remaining train cars from the wreckage, so Roland tells us to search for the key in the most fortified one. The enemies in here are robot loaders, meaning that a corrosive weapon is our best choice. Reaching the fortified wagon triggers a boss battle with Wilhelm, a huge and very powerful robot.

He shoots us with a rocket that splits in many grenades, and he also spawns more opponents, but the first ones that need to be taken care of are the repair drones that increase his health bar.

Tip: A good way to deal with him is to use a corrosive weapon and stay in that narrow passing with the Fast Travel station, because hes too big to fit in.

When he goes away at the edge of the map to heal himself we can go ahead and shoot him from distance. We repeat this process until hes dead, and then we pick up his unique power core.

Tip: We might want to try and kill Wilhelm away from the edge of the map, because we might encounter a bug/glitch where he drops the power core in the chasm, rendering it impossible to collect. If that happens, we must immediately restart the game to be able to fight him again.

Next, we need to use the Fast Travel station to head back to Sanctuary, because with the help of this experimental Hyperion power core, Sanctuarys shields may run indefinitely.

Then we have to speak to Lt. Davis outside the town of Sanctuary, near the exit point to Three Horns Divide, to complete Borderlands 2 A Train to Catch. Doing so will advance the game to the next chapter, unlocking new optional missions, and also triggering the story related mission, Rising Action.

At this point, Borderlands 2 A Train to Catch ends, but we can complete additional optional missions, listed in our full walkthrough for Borderlands 2. One of them is Mighty Morphin. 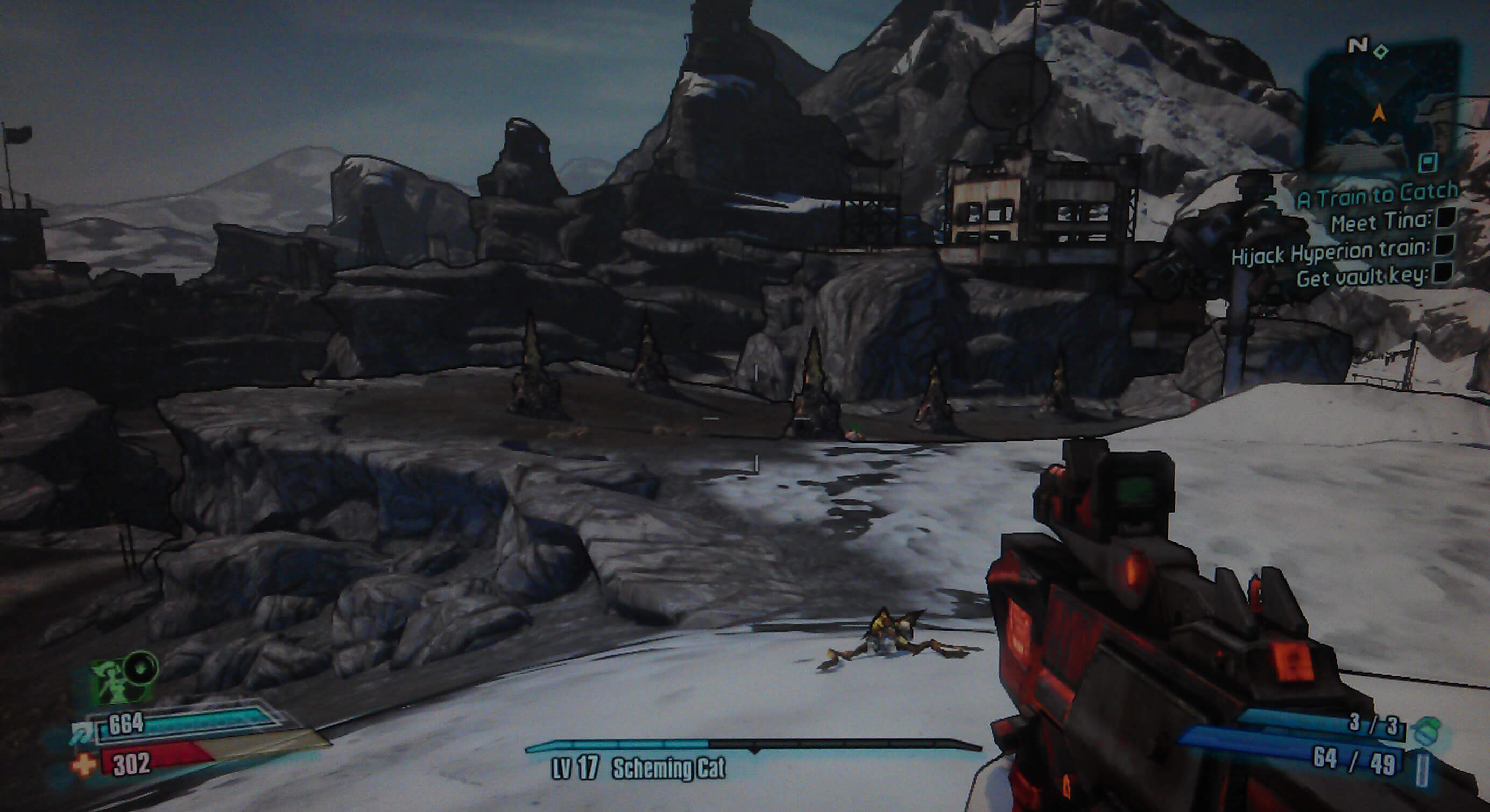