Borderlands 2 A Dam Fine Rescue is the next important story mission we receive at the end of Hunting the Firehawk mission, by speaking to Lilith in Frostburn Canyon.

In Borderlands 2 A Dam Fine Rescue, we have to rescue Roland, whose exact location is pinpointed by Lilith.

However, the Borderlands 2 A Dam Fine Rescue mission is longer than the previous quests, because it requires our presence in different areas, and also introduces new enemy types and bosses.

Roland, the de facto leader of the resistance against Hyperion and Handsome Jack, has been kidnapped by the Bloodshot bandit clan. This is a bad thing. Lilith has instructed you to infiltrate Bloodshot Stronghold and break Roland out. Simple!

At the end of Hunting the Firehawk, Lilith will tell us that we need to save Roland from the Bloodshots in Bloodshot Stronghold, and will also warn us that the enemies are tough, so its best that we complete some optional missions included in our Borderlands 2 walkthrough, until our character reaches at least level 12.

Our first objective in Borderlands 2 A Dam Fine Rescue is to go to the gate in the north side of Three Horns Valley (the exit point to Bloodshot Stronghold) and sound the horn of the car.

Unfortunately, our enemies realize were not on their side (because of our vehicle) and they will jump over the fence and start shooting us. The best thing here is to go back several steps, maintain a safe distance, and eliminate our targets from there, because their combined firepower (and with the help of a turret) will quickly deplete our vehicles health bar. Scooter informs us that in order to get through the gate well need to drive another vehicle.

For that to happen, we have to travel to The Dust (northern exit point in Three Horns Valley region) and speak to Ellie.

Once we arrive in The Dust area we will notice that is the largest zone so far in the game (if its our first visit here, of course) and soon we will be attacked by a new helicopter-like enemy, called Buzzard. We need to drop it down quickly using the vehicles weapons and then we can continue to our waypoint.

Being a large area means that the bandits will have vehicles too, which are far more dangerous than other enemies, so these need to be dealt with quickly. The spiderants are also numerous in this area.

Reaching our destination triggers a cutscene where we meet a new Borderlands 2 NPC called Ellie (Scooters sister), and by talking to her we find out that the last bandit vehicle that she had was crushed.

Next, we have to search for some parts so she can make another one. Now its time for some exploration. All we need to do is drive around the huge waypoints in The Dust to find vehicles owned by our opponents, and destroy them to collect 5 needed parts (if this is our first visit here we may also encounter a vehicle called Cara-Van which is indestructible, but if we kill its two escorts we can stop it, and we can climb it to open a weapon chest).

We bring the parts to Ellie, we speak to her, we assemble the new vehicle and then she uploads it in the Catch-a-Ride system

Tip: She also says to return later if we want some optional missions.

Now we can get ourselves a new Bandit Technical vehicle and then return to the gate in Three Horns Valley.

Honking the horn again will lower the gate given the fact that now we drive a proper vehicle, but unfortunately we have to continue on foot. The things inside seem to be a little too quiet for our taste, but they get messy once we approach the first bridge.

In this location we will meet a badass boss called Bad Mawand his Merry Midgets. He is extremely powerful and can kill us with no more than two or three melee strikes, so we immediately run away to a safe spot (if he does manage to kill us, we will spawn just outside the gate, but he will also have a full health bar again).

The best thing to do here is go outside the camp and let him come for us. He will not come outside and he will only use his weapon, so we stay near the gate and shoot him using a fire weapon. If he backs up and hide when we lower his health bar, we can go after him.

Once Bad Maw is defeated we collect the key he dropped and we use it to lower the draw bridge.

Next, we enter Bloodshot Stronghold and we follow the path to the waypoint (we can use the vending machines to restock if we want), paying attention to the enemies that are similar to Bad Maw (the Bruisers are also dangerous). At some point well reach a larger room with a bandit turret at the end of it.

Its better if we try to kill other enemies first, and then deal with the turret from distance. Soon after this, we enter in a circular room called Satans Suckhole. From here we need to climb to the higher levels and pay attention to a badass enemy called Mad Mike (fire weapons tend to do a decent amount of damage to him).

Tip: At the U-turn in the facility, we should notice an electrified entrance to a room which houses a chest with weapons. The room with the fuse box is just behind us at a slightly higher level (we can actually see the electrified entrance from that room). If we look closer we can spot a cable that needs to be followed to that room (before the room with the big hole in the wall, we turn left), which also has a badass nomad inside. We use the fuse box on the wall and we return to get our gear.

Arriving at the marked location triggers a cutscene where Roland shows us a cool way to kill robots, a new type of enemy that we will encounter from now on. But the joy is short lived, because Roland is kidnapped again by a machinery.

A robot will enter through the hole and explode to destroy the prison’s cell gate. The robots are susceptible to corrosive damage, but if we dont have a weapon like this we should try to use a shock weapon. The smaller robots will come near us and then detonate themselves, so we better run when they stop for detonation. Also, we have to kill some Gun Loaders (one is high above in the room).

After killing them, we take the exit to Bloodshot Ramparts, which is actually an area above a dam. A short cutscene occurs to show us the enemy that kidnaped Roland. More robots will also descend from the atmosphere, so we have to thread carefully, talking them out one at a time (a corrosive grenade is very useful when we catch more of them in a single place).

At the middle of the dam we come across a baddas loader, who is extremely powerful and deals a lot of damage when using his fire rockets. We may die several times in this area, if we dont have the proper weapons; therefore its better to go back through the train carts and shot him from the other side (obviously, he cant cross them).

After this fight, we meet a flying drone enemy type, known as the Repair Surveyor, which shoots an electrical charge. It can be killed just like the Rakk birds: we observe his movements and kill it while he approaches us from the front.

Tip: Staying with our back to a wall means that we can control his movement.

After getting around the giant Marcus Kincaid Statue, killing all the robots in our way, we reach W4R-D3N, a special type of enemy. This boss has an incredibly durable shield, and he spawns constructors, repair drones, and turrets. We fight with them for a while and then a ship will come to take W4R-D3N back to the Hyperion prison in The Dust area.

We use the Fast Travel system nearby to go to The Dust, but before doing anything else we should restock our ammo.

Tip: We can travel back to Sanctuary to buy a corrosive weapon from Marcus, because the fight is far from over.

Next, we navigate to the waypoint on the map, eliminating all the vehicles, and when we arrive, we have to take the exit point to Friendship Gulag.

Friendship Gulag is a prison guarded by robots, surveyors and engineers. It also features some spores called Necrophage that can be shot in order to do corrosive damage to the robots  nearby.

Tip: We can shoot the robots legs to slow them down.

The enemies are numerous and can kill us in a heartbeat, so its best that we advance slowly, and restock whenever we can. When we finally reach the waypoint, the battle with W4R-D3N will resume.

This time however, his shield will drop faster, and he will also spawn badass constructors that must be avoided at all cost (just like in the fight on the dam).

A good strategy is to stay hidden behind some obstacles in the arena (to avoid W4R-D3Ns rays) and then use a rocket launcher to drop his shield. Once he is finished, we eliminate the remaining enemies and then we speak to Roland to complete Borderlands 2 A Dam Fine Rescue and trigger the next mission, called A Train to Catch. 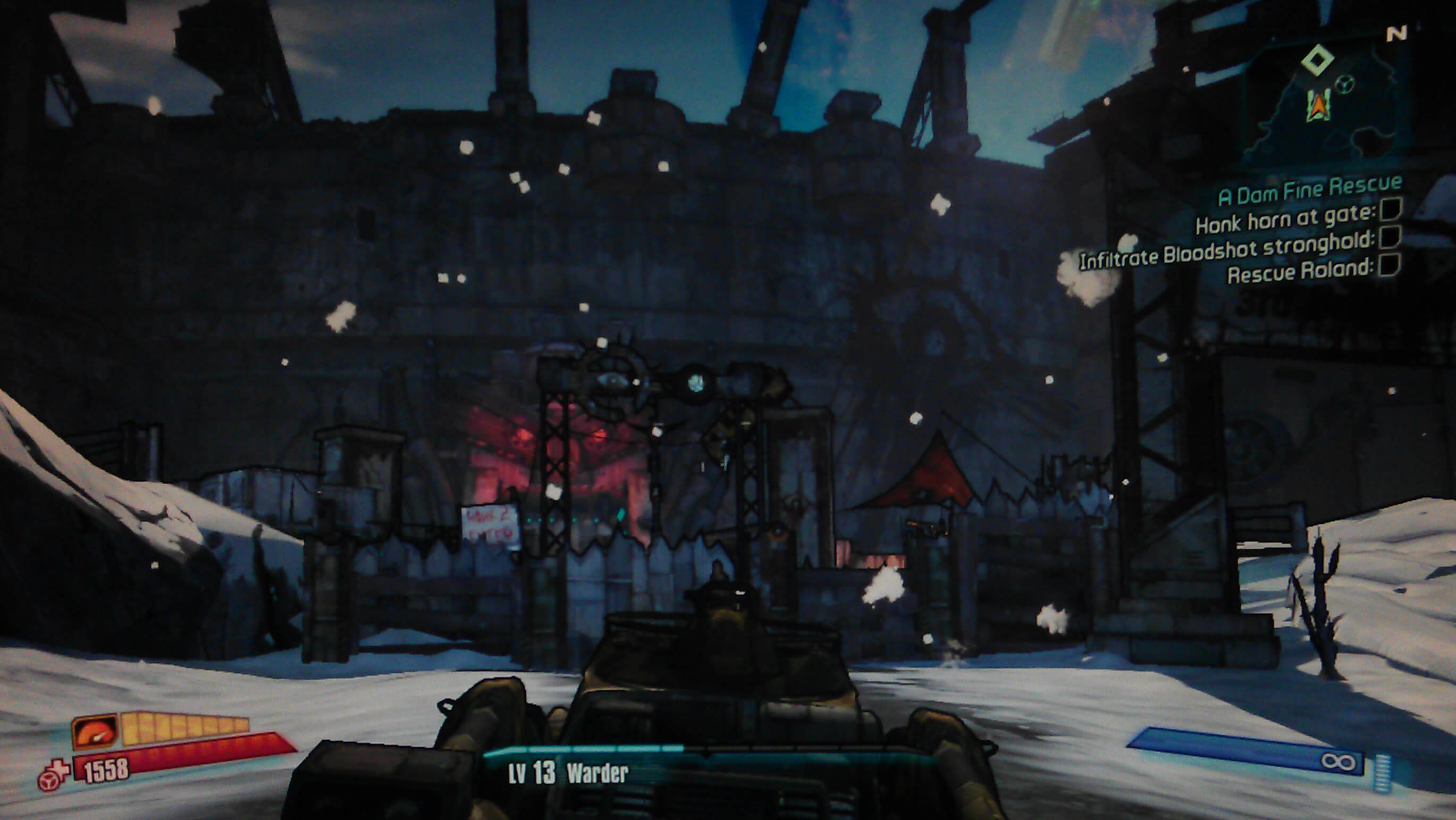