Assassin’s Creed Liberation HD features 7 Business Rival Missions, unlocked by following Avelines story. Six of them are in New Orleans area, and one in Bayou. All Business Rival Missions feature constraints and various objectives that will allow you to achieve full synchronization, and the guide below explains how to complete them.

For each mission in Assassin’s Creed Liberation, a strategy guide was created, providing tips and hints, such as the locations of your business rivals, or the weapons you should use to get 100% synchronization.

The first Assassin’s Creed Liberation Business Rival Mission on the maps below is named M. de Chevallier’s Weapons and can be triggered in New Orleans, by talking to a citizen located in the lower left corner of the map.

For this mission you will be asked to find and kill a business rival close to your location, but to get full synch you will have to use a powder keg and you will also have to remain undetected. M. de Chevallier’s Weapons is a tricky side-mission, and you should use Aveline’s Lady Persona in order to complete it. Also, make sure you have several poison darts and a handgun, before attempting the mission.

After you trigger it, follow the red dot on your screen and it will take you to your target. Identify it using the eagle vision, and notice that M. de Chevallier is followed by several guards. Also, observe that your target follows a specific route, around several buildings.

At some point, the target enters a small backyard, using one of the alleys between the buildings. Explore the backyard and you should see a tree and a bench. The tree marks the location where you have to place the powder keg.

You will find one close to a large barrel inside the same backyard; however, first you have to kill (poison) all soldiers that patrol inside the alleys around the backyard. This mission requires patience, and only after you poison the said guards you should place the powder keg near the tree.

Once the keg is placed on the ground, find a safe area and wait for the target to arrive. Shoot the keg when he is near but make sure his guards are also close to it, because you have to kill them too when the keg explodes.

Next, loot Chevallier’s body to complete the mission.

M. Salmons Ships is the second mission marked on the map of New Orleans, and it is unlocked in the harbor area. It is a short mission, and again, you should opt for Aveline’s Lady Persona; however, before starting it, you should buy at least one poison dart.

To get 100% synch you also have to remain undetected. Once you start the mission, locate your target (he is wearing a blue suit), and follow him until you find a secluded spot.

Shoot him with your poison dart and wait for the guards nearby to leave the area.

If needed, poison them too but keep a safe distance to remain undetected. Once all of them are dead, make sure you loot M. Salmons body to complete the mission.

Assassin’s Creed Liberation M. Ratel’s Merchants is the third business rival mission you can complete in New Orleans, if you follow the order on the maps below. The side-mission is triggered by talking to a citizen located close to Avelines HQ.

The mission features only one constraint; however, M. Ratel’s Merchants is also a tricky mission, because you will be asked to indirectly kill your target. In other words, you are not allowed to kill him yourself. Because of this constraint, you should consider using the Lady Persona.

Furthermore, a berserk dart is also required. After you switch to the Lady Persona and buy a berserk dart, move towards the target but dont enter the restricted area. Ratel is located between two buildings, and he is talking to a soldier. Go around the restricted area, and make sure you remain on the upper docks, until you have a good view on your target.

Next, shoot the berserk dart but dont aim for Ratel. Instead, aim for the soldier because he will kill Ratel for you.

Unlike the previous mission, M. Chapperon’s Textiles is a short AC Liberation Business Rival assignment that can be triggered in the northern section of the city.

The mission is timed, and the first constraint is to complete it in less than 2 minutes. First, buy a poison dart and switch to the Lady Persona. Next, talk to the citizen to start the mission, and the moment you see the clock on your screen, start running towards the green dot.

The trickiest part in this mission is to find your target within the allotted time; therefore, once you get close to its location, open your map and notice the green area where you have to search for M. Chapperon.

Before entering the area, you have to be aware that M. Chapperon patrols around the marked zone, which means that looking for him anywhere else is a waste of precious time. Instead, remain outside and go around the green zone while Aveline’s Eagle Vision is activated.

The moment you see him, shoot the poison dart and loot the body.

M. Marcantell’s Materials is another AC Liberation Business Rival Mission available in New Orleans. It is triggered in the northern area of the city, and it features two constraints.

To complete both of them, you have to remain undetected, and kill M. Marcantell after you charm him. Because of the second constraint, you have to complete the mission using the Lady Persona.

After you trigger the side-mission, travel to the plantation outside the city and you will find your target in front of the large mansion, near the stairs. Charm him by pressing the corresponding button, then you will have to find a secluded spot to kill him, but you have to move fast. Follow the stairs at the entrance and then go right around the building.

Make sure the target is close to you and use the hidden blades to assassinate M. Marcantell, while standing close to one of the fences on the balcony. Loot his body to complete the mission, and then leave the plantation.

Additionally, make sure that Aveline carries several smoke bombs in her pouch.

The mission takes place in the harbor where you must locate a ship. When you board it, you will be asked to defend it and several soldiers will spawn. For the secondary objective you will be asked to kill Vandal using the hidden blades; therefore, the blades will be your primary weapons.

Using the smoke bombs, stun the first wave of enemies and kill all of them. Dont leave the ship because you will fail the mission.

Wait for the next wave of enemies to get close to you and drop another smoke bomb to stun them. Continue to assassinate the soldiers until Vandal gets close to you. Stun him too, and then using the hidden blade, kill him. 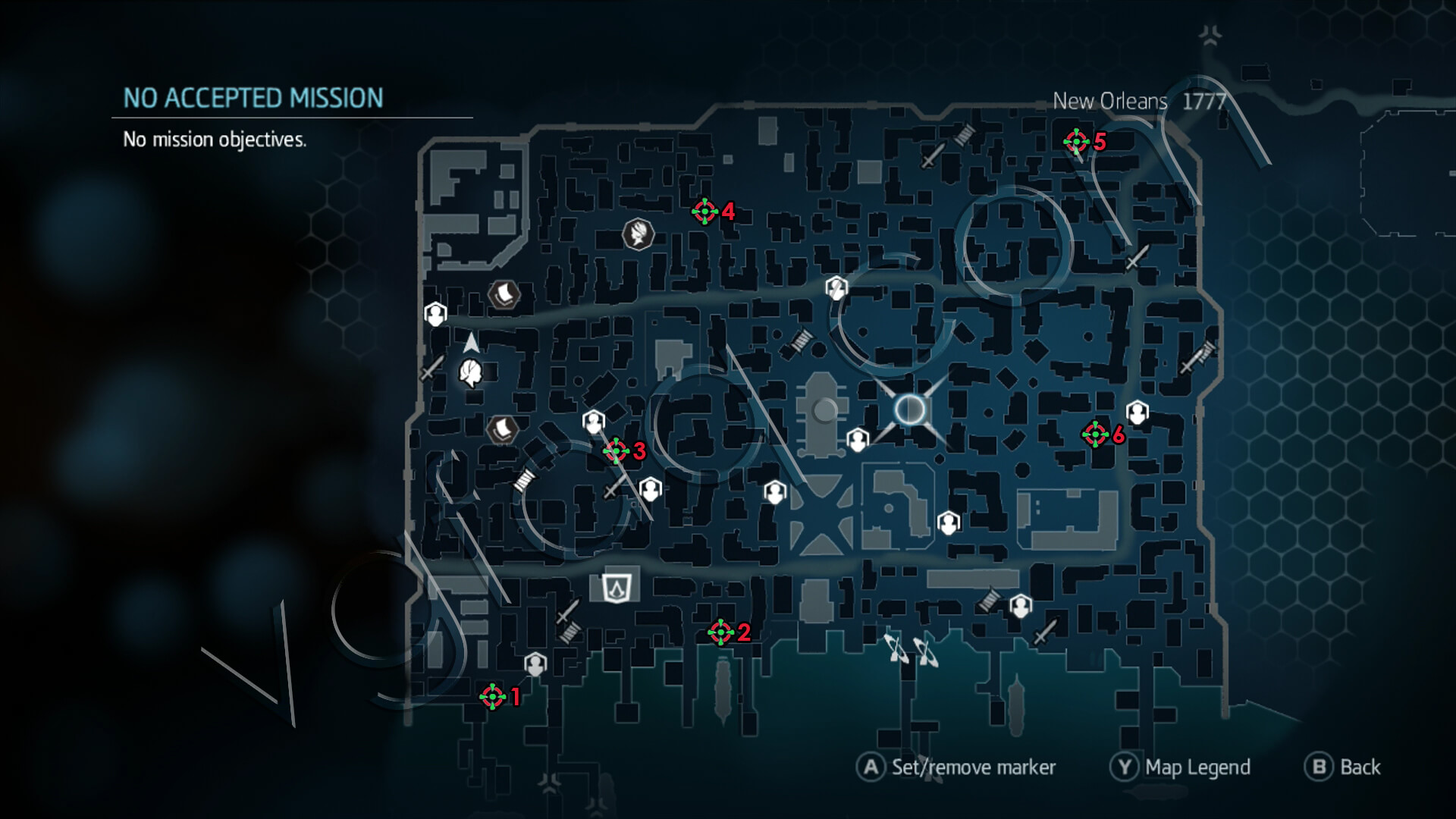 The last Business Rival Mission in AC Liberation HD is M. Reynaud’s Bypass and it takes place in Bayou. It is another combat-based mission; therefore, before starting it, switch to Aveline’s Assassin Persona.

Several sleeping darts are also required, because if you wish to get 100% synch you will have to kill your target without taking any damage. After you trigger the mission by talking to the citizen in the south-western corner of Bayou, you will be sent to an area marked on your map.

When you get close to the said area a group of soldiers will spawn, and one of them is your target. Try to stay above the ground and follow the group. Use the poison darts to take out the soldiers one by one, or shoot one dart to assassinate Reynaud.

You can also opt to rush in and drop a smoke bomb stunning all soldiers, but your first target should be M. Reynaud. Once you complete the mission the Business Woman achievement/trophy is unlocked. 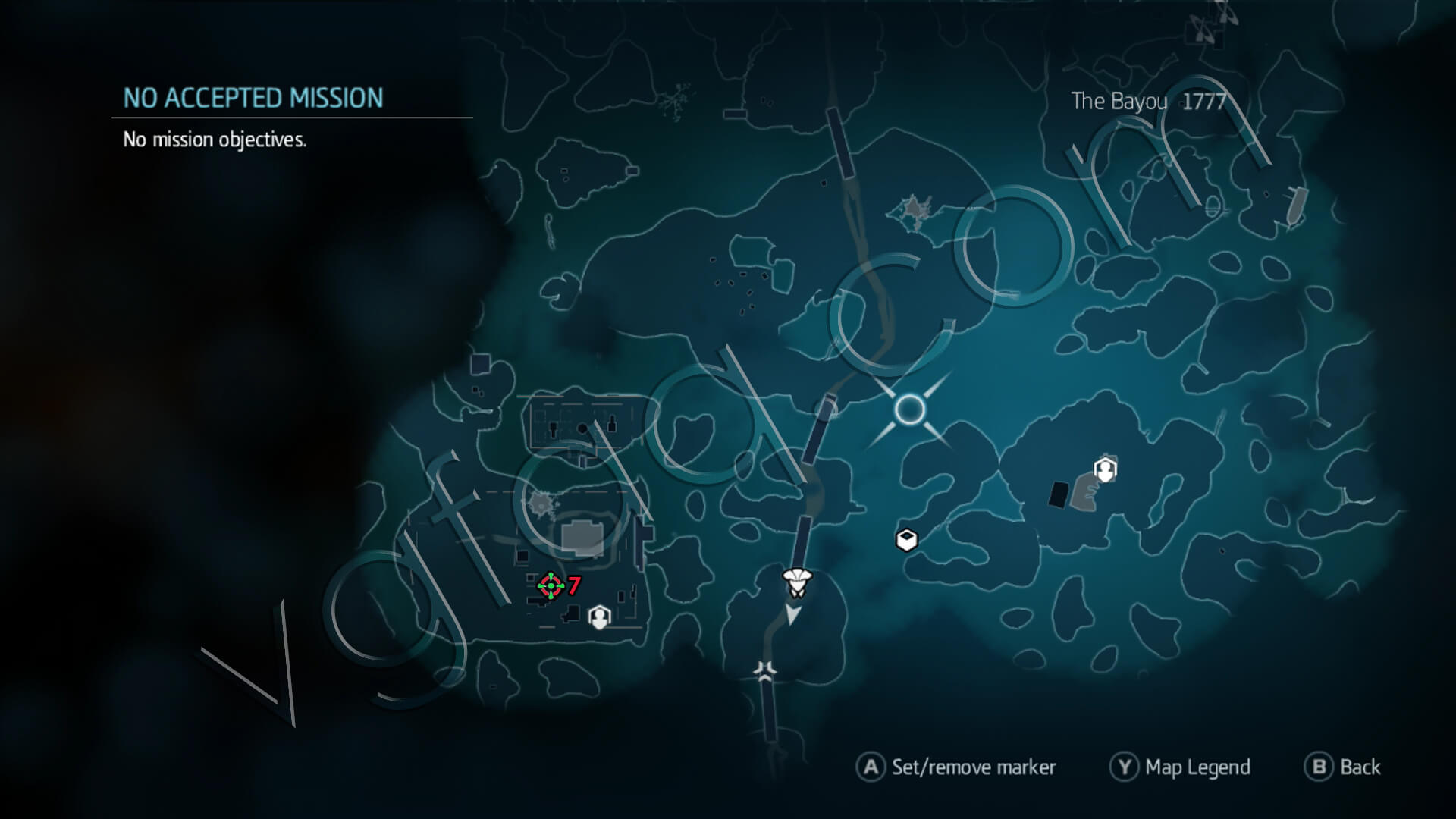